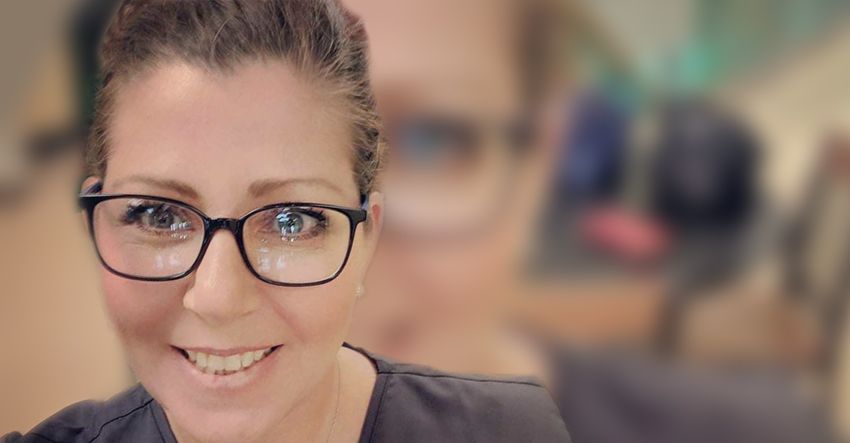 “It’s not easy being a military wife. You have to really be sure that you’re in love with that person before committing to them for the long-haul, because that’s all you’ll really have during deployments,” says Heather Hicks.

For Hicks, life with a loved one in the military is very familiar. She moved around a lot during her childhood as her father served in the United States Army. In fact, her little sister was born when they were stationed overseas in Germany.

When Hicks and her husband started dating, he had already served time in the Marine Corps. He was compelled to sign up with the Army National Guard after 9/11. While it might not seem ideal to many people, Hicks actually thinks that their ability to handle the long distance so well is what keeps their marriage so strong.

Hicks’ husband is a Master Sergeant in the Army National Guard. As for Hicks, her passion lies in taking care of others. She began her career in the healthcare industry as a Personal Care Aid (PCA). With the support of the G.I. Bill, she obtained the qualification of a Certified Nursing Assistant (CNA) and is continuing her education to become a Licensed Practical Nurse (LPN).

Hicks had spent a decade working with people with developmental disabilities and individuals with mental health issues. But working in the mental health field was chaotic and left her feeling drained and anxious at the end of every day.

She decided to make a career shift after her mother passed away two years ago. “I was touched by the quality of care my mother received at the end of her life and wanted to give back to people in the same way,” Hicks says. She eventually transitioned into the home care field, joining Right at Home Belmont, North Carolina in 2017 as a caregiver.

“Some people work for a paycheck, but I work for passion. I just really love helping people. It’s my true calling,” Hicks says.

Bill Osborne knows firsthand how challenging life can be for military families. As a Combat Veteran of the United States Marine Corps, he understands the experience of returning to civilian life after a deployment. Today, as the owner of a home care agency, Right at Home, he made it a point to employ and support veterans, military significant others and spouses.

A little over a year ago, which is around the time Hicks started working for Osborne, her husband was deployed to Kuwait.

“When a deployment happens, which can be up to 18 months, it’s a hard, hard time for the military spouses,” says Osborne. “As an employer, we are there for them. We provide more than a place to work. Our military employees know that they have a place to go and someone to talk to when they need it. We can help them get through the time which feels so long when their loved one is gone.”

And that sentiment was not lost on Hicks, who felt supported even as a newer employee.

“Right at Home is hands down the most amazing company I have worked with,” says Hicks.  “Bill understands and is empathetic about being a military spouse and the challenges that come with it.”

She also noticed that Osborne likes to place her with Veteran clients, many of whom have served in Vietnam. “I respect them, and they know that. I am able to feel out what they are comfortable with and let them take the lead, especially when it comes to talking about their time in the service. Many of them were left with a bad taste in their mouths from the experience they had when they returned from service,” Hicks says.

It might seem like a small way to serve the country, but Hicks is doing her part for America by providing aid and comfort for aging Veterans when they need it most. It’s something she would want done for herself and her husband and feels that it’s the least she can do to show these aging Veterans gratitude for their service.

Giving Back: Military Significant Others and Spouse Support

Having a career in caregiving that she loves has provided Hicks with a great distraction when her husband is working. “We’ve been married for 7 years, but only lived together for one of them,” says Hicks. “And this time around it’s been so nice to have the extra support of the Osbornes. They called to check in on me throughout the deployment. Someone without that military background wouldn’t understand the idea of being married to the military.”

Although the time they miss out on together during deployment can be a challenge, Hicks and her husband are able to get through the distance by taking it all one day at a time. It’s not always easy to communicate and stay connected during a deployment, but Hicks leans on family, friends, and now her employer, to make it through the tough times.

Hicks is also very involved with the Family Readiness Group (FRG) an organization of family members, volunteers and soldiers who belong to the same unit. Members depend on the group for emotional support, donations of certain items and events or celebrations for happy occasions.

As one of the older wives in the group, it makes Hicks happy to help the younger military wives who might be struggling during their first deployment. Even though Hicks could choose to go live with her husband near the base where he’s stationed, she’s at a point in her life where she’s loving the stability of being in one place and getting involved in her greater community. “My husband’s career will always come first,” says Hicks. “But I just really like being able to help others in this way.”

Contact Us If you can’t find what you’re looking for or have a specific request, simply complete the form below. We’re always here to help.
3fc5dbfc-80bb-46f8-a8ae-8cc2ef73ee7e https://www.rightathome.net/belmont LocalSite