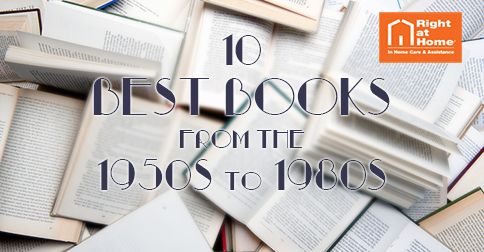 With the immense collection of American literature, it is nearly impossible to narrow a list of 10 best books to read. So we picked these 10 best books from the 1950s through 1980s as favorites of the boomer generation (born 1946 –1964). These children’s classics to fiction standouts helped shaped the ingenuity, determination and humor of a generation of astronauts and politicians to rock stars and teachers.

“The Catcher in the Rye,” J.D. Salinger (1951)
Sixteen-year-old Holden Caulfield is considered an opponent of a phony adult world and a great influencer on the Beat Generation of the 1950s and America’s hippies of the 1960s. Salinger’s novel is still required reading for many high schoolers, many who face their own adolescent angst.

“Fahrenheit 451,” Ray Bradbury (1953)
One of Bradbury’s most notable novels, “Fahrenheit 451” paints a disturbing picture of a future America in which books are outlawed and burned. Many applaud the book for focusing on book burning as suppressing dissenting ideas. Bradbury described the novel as a commentary about the negative influence of mass media on reading literature.

“The Cat in the Hat,” Dr. Seuss (1957)
The defining book of Theodor Seuss Geisel’s writing career, “The Cat in the Hat” continues as a widely popular children’s classic translated into more than a dozen languages. Known for his famous one-name pseudonym, Dr. Seuss wrote and illustrated other beloved classics including “How the Grinch Stole Christmas!” and “Green Eggs and Ham.”

“To Kill a Mockingbird,” Harper Lee (1960)
Creating one of the most enduring characters in all of American literature, Lee won the 1961 Pulitzer Prize for fiction for her depiction of a Deep South small-town attorney who defended a harshly accused black man.

“Catch-22,” Joseph Heller (1961)
The bestseller features the inventive plans of bombardier Yossarian to escape the terrors of World War II. Heller’s work coined the phrase “catch-22” which pits an individual in a perplexing dilemma against impossible-to-follow contradictory rules or procedures.

“The Feminine Mystique,” Betty Friedan (1963)
Friedan debunked the status quo that middle-class women were fulfilled as housewives and mothers. The activist inspired the feminine movement of the 1960s and 1970s, encouraging women to abandon the “feminine mystique” by pursuing higher education and careers.

“Roots: The Saga of an American Family,” Alex Haley (1976)
Haley traces the true narrative of his ancestor Kunta Kinte who was abducted in 1767 from his West African village and shipped to America and sold to a Virginia planter. Haley’s unforgettable work is a tribute to his great-great-great-great-grandfather and all six indomitable generations of Americans of African descent who followed after him.

“Lake Wobegon Days,” Garrison Keillor (1985)
Based on the American humorist and radio personality’s material from his “A Prairie Home Companion” radio show, the internationally successful novel invites readers into the lives of hearty folks from the fictitious town of Lake Wobegon, Minnesota.,/p>

“Beloved,” Toni Morrison (1987)
Morrison won the 1988 Pulitzer Prize for fiction for her post-Civil War true story of a slave who fled her Kentucky plantation to live free in Ohio. Haunting consequences ensue when a posse comes to reclaim the troubled escapee.

What are your recommendations for the 10 best books for baby boomers to read?