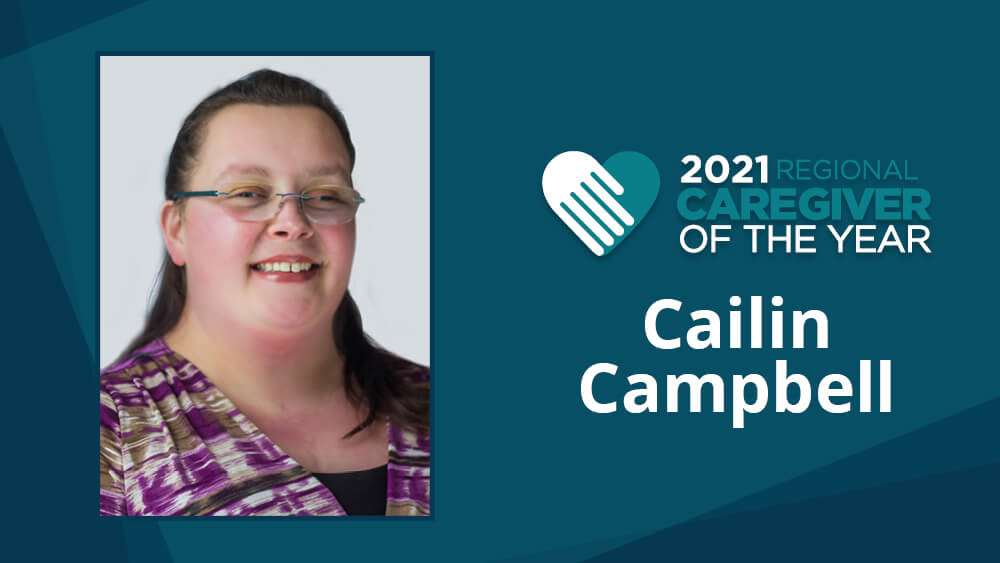 When it comes to caregiving, Cailin Campbell strives for excellence. In fact, she admits that she’s often guilty of measuring her self-worth by how much she can do for others.

“I’m working on that,” says Cailin with a laugh. “But I really want to be that caregiver whom everyone loves to have in their home. Most clients treat me like a daughter or granddaughter, and it’s such an honor to be included as a part of their family.”

Cailin knew she wanted to care for others from a young age. She went to college to pursue pediatric nursing, however, school proved to be harder than she expected. Instead, Cailin decided to shift gears and apply for a job at a local veterans center, where she proudly worked for five years. When she saw an advertisement for Right at Home Chester Springs, Cailin thought it was a job that would be right up her alley.

That was almost four years ago, and today Cailin is not only enjoying the job with Right at Home, but she’s also being recognized for her devotion to her role as a caregiver. Cailin was awarded Mid-Atlantic Region Caregiver of the Year for 2021.

Cailin provides nonmedical companion care for her clients, which often includes some light cleaning, cooking and running errands, as well as spending quality time chatting about life. She admits that some clients are more challenging than others, either in terms of attitude or care needs, but she tries to go into every situation with empathy.

“I realize it all depends on what their circumstances are,” Cailin says. “Maybe they’re just having a bad day. No matter what they’re going through, I always try to make them laugh and bring my quirky personality to the situation. If that doesn’t work, I’ll try a more nurturing approach, and if all else fails, I’ll call the office for backup. But that rarely happens—90% of the time a hug or laugh will do the trick!”

One of Cailin’s current clients has Alzheimer’s, and despite the fact that he is mostly nonverbal, Cailin still manages to make him laugh by joking and playing games with him. She’s also become a great support for his wife, who greets her with a cup of tea every morning when she comes into the house.

“People never stop needing care,” Cailin says. “I love being the one to make a difference in someone’s life. To some degree, just for a little while, if I can make your day brighter, I’ve done my job.”

As Jean Pierce, Client/Caregiver Ambassador for Right at Home Chester Springs, puts it, “Cailin is one of those people who can take on any client and make it into a magical relationship.” Jean describes the time when Cailin was placed with a “self-proclaimed cranky old lady” who constantly tested the caregivers who were sent in to look after her.

“No matter how this client tested her—insults, complaints or creative criticism—Cailin motored on,” says Jean. “She was determined to make a difference in the client’s life; she picked up extra shifts so [the client] would never be without care, she made friends with the client’s crazy cat, and she never let anything get under her skin.”

For several years, Cailin cared for a client who used a wheelchair and was “very particular about what he wanted and how he wanted it done,” Cailin says, but the two became so close that she describes him as a second dad.

“He gave me parental advice and guidance and was very attuned to my feelings and emotions,” says Cailin. “He would see a certain look on my face and ask me what was going on. I was devastated when he passed away, and I still think of him often.”

Caregiving Is a Superpower

Although Cailin is only 31, she is wise beyond her years and approaches life with a sense of empathy that’s not usually reserved for the young. She’s simply just programmed to want to help others, and she’s dedicating her life to the cause.

“Caregiving is extremely rewarding if you’re in it for the right reasons,” Cailin says. “This is not a job for everyone. You have to have the right attitude for it, a giving heart, a desire to help people and a strong backbone. You can’t be judgmental; you have to accept the good, the bad and the ugly. Not every day is going to be sunshine and rainbows, and you have to take that with a grain of salt.”

Hillary Young is a writer dedicated to helping older Americans live healthier, more fulfilling lives. She currently blogs for HuffPost50 and Medical Guardian. You can find her on Twitter as @hyoungcreative.
Share this resource