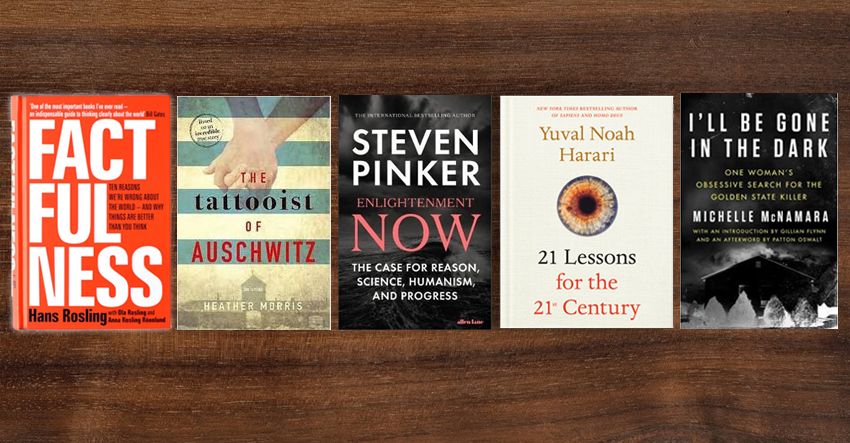 The holiday season is here! Whether you are spending time with family, traveling, or having a “staycation,” the holidays are always a good time to catch up on some reading. We have sourced five popular books on Goodreads in 2018, including both fiction and nonfiction.

1. “Factfulness: Ten Reasons We’re Wrong About the World—and Why Things Are Better Than You Think” by Hans Rosling, Ola Rosling and Anna Rosling Rönnlund;

Medical doctor and professor of international health Hans Rosling addresses the biases and misconceptions people in developed countries have that affect their worldview. “Factfulness” examines the world based on data and facts; it suggests strategies for readers to evaluate information presented in mass media. Reviewers referred to the book as a framework, or guide to understand the state of the world.

“Factfulness” became wildly popular, as Bill Gates highly recommended it. Gates said, “The bulk of the book is devoted to ten instincts that keep us from seeing the world factfully. These range from the fear instinct (we pay more attention to scary things) to the size instinct (standalone numbers often look more impressive than they really are) to the gap instinct (most people fall between two extremes). With each one, he offers practical advice about how to overcome our innate biases.”

2. “The Tattooist of Auschwitz” by Heather Morris

“The Tattooist of Auschwitz” is fiction based on the true story of two Slovakian Jews who survived the Holocaust. Lale Sokolov decided to tell his story as the tattooist who marked Jewish prisoners in Auschwitz. Through his unique position at the concentration camp, Lale risked his life finding food to keep other prisoners and his wife, Gita, alive. Although the circumstances were horrifying, Lale and Gita’s love story and Lale’s perseverance shows the best of humanity and provides hope for readers.

A reader said, “This is a story … about courage in the face of the horrors of the camps and loss of family, courage sustained by the strength of the human spirit and it’s a love story that I’ll never forget … Lale … wanted his story recorded so ‘It would never happen again.’”

3. “Enlightenment Now: The Case for Reason, Science, Humanism, and Progress” by Steven Pinker

Steven Pinker is an experimental psychologist and a cognitive scientist. He explores the errors of perception and details progress mankind has made through the use of data. Many readers compared this book to “Factfulness: Ten Reasons We’re Wrong About the World—and Why Things Are Better Than You Think,” as both books deal with a similar subject. “Enlightenment Now” is also highly recommended by Bill Gates.

Reviews are generally positive toward “Enlightenment Now. ”A reader said, “‘Enlightenment Now’ illustrates Pinker’s practical yet tangible style, but is freshly positive as well. His explosive understanding toward social science and political empathy will appeal to all big thinkers and affirmative readers alike.”

Bestselling author Yuval Noah Harari is a historian. While his previous books “Sapiens” and “Homo Deus” focused on the future, “21 Lessons for the 21st Century” reflects on some of today’s most discussed topics including nationalism, immigration, terrorism, war, ignorance, justice and post-truth. Harari addresses the challenges in his book and offers practical strategies to navigate through a changing world.

A reviewer said that “21 Lessons for the 21st Century” is “masterful and exquisite non-fiction … Delightful, wise and very perceptive.”

5.“I’ll Be Gone in the Dark: One Woman’s Obsessive Search for the Golden State Killer” by Michelle McNamara

Michelle McNamara was an investigative journalist and a true crime writer. Her interests in researching serial killers active in the mid-70s and 80s led to a series of interviews with detectives and victims of the Original Night Stalker and East Area Rapist. As authorities found DNA evidence connecting the two criminals, McNamara eventually coined the term Golden State Killer (GSK) and turned her research into this book. Unfortunately, McNamara passed away suddenly in 2016 without finishing the manuscript. Her husband and two of her fellow researchers collaborated to complete the story and release it in April 2018. Coincidentally, the Golden State Killer was arrested in California also in April 2018.

Within six months after its launch, the book has gathered approximately 50,000 ratings and 6,000 reviews on Goodreads. One reviewer praised McNamara, saying, “She was an incredibly gifted writer who can provide detail about the GSK’s crime in such a way that we feel the full weight of what he did, and how incredibly scary this story is … While it never feels exploitive she conveys all the ways that the surviving victims’ lives were changed by the attacks on them.”