Are Men’s Brains Smaller Than Women’s? 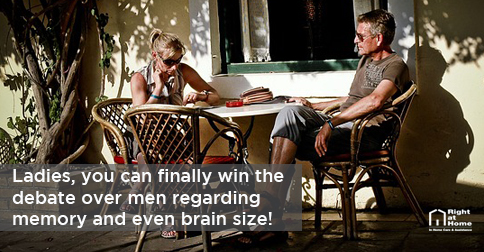 Women, you can finally win the debate over men regarding memory and even brain size. A Mayo Clinic study of 1,246 men and women between ages 30 and 95—with normal cognitive function—shows that the brain’s memory region, the hippocampus, shrinks more for men than women, especially past age 60.

While memory for both sexes declines starting around age 30, older men’s recall dips significantly below average. Regarding the issue of men possessing larger brains, brain size is proportional to height. The study finds that when corrected for height differences, women’s hippocampus and verbal memory are better than men’s. Estrogen, progesterone and other hormones help protect female brain health even past menopause, which also leads to a memory advantage.

Simply put, male and female brains differ. Brain researchers have concluded that boys’ brains develop in math and geometry skills about four years earlier than girls. Conversely, girls’ brains mature in language and fine motor skills about six years earlier than boys. Females are also faster and more accurate in interpreting emotions, while males tend to excel at spatial skills. In processing language, girls and women show activity between both left and right brain hemispheres, and males rely solely on the left hemisphere.

Using what’s upstairs is not a competition, scientists advise, but more of a complementary difference that can promote both sexes working together. Memory capacity and brain volume vary more noticeably between men and women by older age and are not correlated with intelligence.

“No matter how you slice and dice these measures of neurodegeneration, everything declines with age – very few people remain normal into the late 80s,” Dr. Clifford Jack of the Mayo study summarizes. “It starts first with men, but women follow.”

What differences in memory do you notice between older men and women?