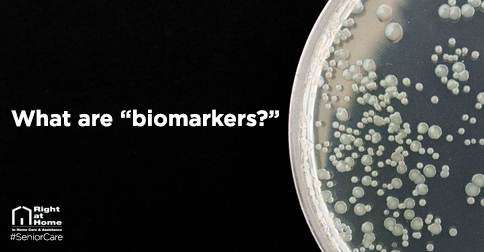 You may not be familiar with the term “biological markers,” commonly known as “biomarkers,” but these substances found in the body’s blood, fluids and tissues are routinely used to detect, diagnose or treat medical conditions. Biomarkers measure specific health processes or illnesses in the body including blood pressure, cholesterol, body mass index and fasting glucose levels. Biomarkers can take different forms as genes, cells, proteins, antibodies, hormones, enzymes and other compounds.

Biomarkers help predict illnesses such as cardiovascular disease, diabetes and cancer. For example, body temperature is a common biomarker for fever. Prostate-specific antigen, or PSA, is a biomarker for prostate cancer. The biomarker C-reactive protein measures inflammation. Resting heart rate is a biomarker that indicates heart functioning and overall fitness. Triglycerides are a biomarker for heart attack, coronary heart disease and pancreatitis.

While the use of biomarkers dates back more than 50 years, breakthrough research continues to show how biomarkers can help diagnose disease risk, detect the presence of disease and tailor disease treatments in patients. In one Johns Hopkins University School of Medicine study, researchers followed 265 middle-aged healthy participants whose cerebrospinal fluid was collected between 1995 and 2005. Roughly 75 percent of the group had a close family member with Alzheimer’s disease, which put these individuals at higher risk for developing the brain disorder. Through the decade of measurements and a final round of tests and a physical exam in 2009, researchers discovered biomarkers in the cerebrospinal fluid that can help predict Alzheimer’s cognitive impairment years before the onset of disease symptoms.

Biomarkers hold great promise for individualized medicine and the development of new drug therapies, especially for older adults with a number of disease risks or compromised body systems.

What common biomarker tests do you think are most important for seniors?