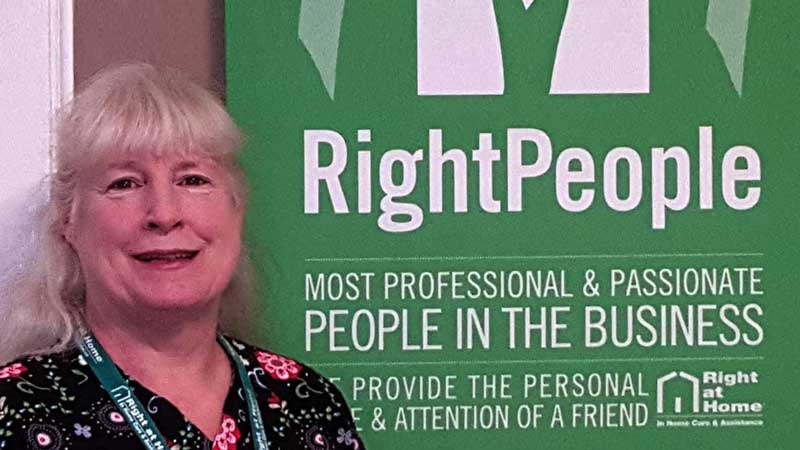 Mary Traina is a natural-born caregiver. She married young and soon became a stay-at-home mom to three children. As her kids learned how to be independent, she decided to go back to school to study occupational therapy. After completing her associate’s degree, Traina took a job as a Certified Occupational Therapy Assistant (COTA) because she wanted to help people.

“I just wanted to give people a chance to do things they couldn’t really do anymore by finding them a different way to do it,” says Traina. “It was great to be able to make people happy in that way. Everyone deserves a chance to be independent for as long as possible.”

Traina worked as a COTA for two years before deciding to become a Certified Nursing Assistant (CNA) and taking a job with UMass Memorial Home Health & Hospice.

“I did it to get more face time with clients,” says Traina. “I wanted to have longer, more meaningful interactions with people, and being a CNA allowed me to do that.”

From Hospice to Home Care

Many people hear the word “hospice” and immediately think about the final days of life, which may be painful and difficult. But the reality is that hospice services can provide much-needed care and comfort for up to about six months for terminal patients.

“Most people don’t know what the dying process is, what it entails,” says Traina. “It’s a really good feeling to help a family navigate that process. There isn’t enough training or education for both patients and their families when it comes to death.”

Traina worked at UMass Memorial Home Health & Hospice for a little over 13 years, until her division of the organization was shut down. After leaving the hospice field, Traina worked at a nursing home for three years before deciding to make the jump to in-home care in 2015 with Right at Home in Westborough, Massachusetts, in the suburbs west of Boston.

“One of my current clients was diagnosed with pancreatic cancer and is in hospice now,” says Traina. “In all my years of doing this, I’ve learned that there’s a fine line between getting attached to people and being there in a professional way to help a family get through the end of a loved one’s life. It’s hard not to end up with a broken heart.”

Through her hospice work, Traina says that she is not afraid of death and dying — both professionally and personally. “It’s about what we do with our lives while we’re here,” she says. “I want to use my time here to make other people’s lives better.”

Seeing Beyond Diseases: Improving the Quality of Life for Those She Serves

In her work with Right at Home, Traina has had the pleasure of working with a variety of clients, who all have had different health concerns and outlooks on life. One of her first clients was a man with ALS, also known as Lou Gehrig’s disease, who was struggling to find a caregiver he could connect with. Since ALS makes you lose control over your physical body while leaving your mind sharp, it was important to this client to find someone who could not only handle the physical demands of the job, but also provide mental stimulation in the process.

“He wanted to have someone to share things with, like watching the news and talking about current events, or watching football games and getting excited about his team,” recalls Traina. “He was a really interesting guy — he was a World War II veteran, an architect, an avid skier, and really into politics. I loved getting to spend time with him.”

Three days a week, Traina provides care for a client who is 91 years old and living with dementia. Although her client has three sons, they don’t come to visit often, because, as Traina notes, dementia can be a difficult diagnosis for families to manage, but caregivers tend to have a different outlook.

“I understand how it can be frustrating to hear the same story over and over again, or get angry if your loved one says something that is not true, but they can’t help it, it’s the disease,” Traina says. “She can tell me the same story as many times as she wants and I’ll never correct her if she says something that’s untrue. I’ve found that when it comes to dementia, most patients don’t want to be filled in on the reality because it just adds to their confusion.”

Traina also works three times a week with an 85-year-old woman who is legally blind and a ward of the state. She has no family, and a lawyer who was appointed to her makes important decisions on her behalf. Once a week, Traina brings a tablet with her so the two can listen to music, which is one of her client’s favorite things to do.

“The songs remind her of her youth and make her feel good,” Traina says. “She had traveled all over Europe when she was younger and requests a lot of European songs that bring back good memories for her.”

Working and Living as a Full-Time Caregiver

When Traina isn’t taking care of clients for Right at Home, she spends her time caring for her boyfriend, who has a rare genetic blood disorder, and caring for her mother who is almost 80 years old.

“Sometimes it’s hard to balance caring for everyone and going to work,” Traina says. “My boyfriend is disabled due to his condition, and treatment is difficult, but we get through it. I try to check on him during the day, popping home between clients or at lunchtime if I can. I keep everything organized enough for him to be able to stay alone in the house while I’m at work.”

Traina has an enormous amount of patience and is motivated by wanting to make others happy. She has no plans to retire and intends to keep working as a caregiver for the foreseeable future.

“I like spending time with people, and I like being able to help them,” Traina says. “I have an awareness about how other people are feeling, and I know the right way to respond to their needs. I’ve been given this gift, and I want to be able to use it for as long as I can.”