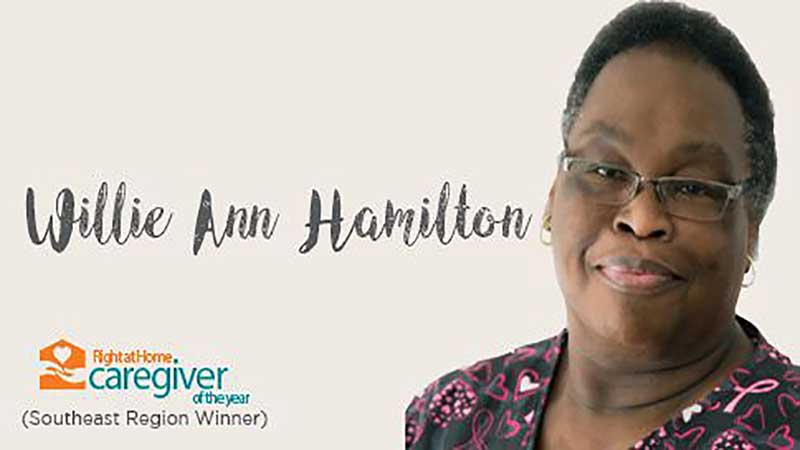 A Category 2 hurricane hit Hilton Head Island, South Carolina in October, 2016. When the governor issued a mandatory evacuation order, Willie Ann Hamilton was with a client who has on-set dementia and mobility issues. She contacted the client’s daughter in Marietta, Georgia but couldn’t reach her.

“I immediately called my daughter in Charlotte and asked her to reserve us a room, then I drove the client 200 miles away until we were safe,” says Hamilton. The client’s daughter turned out to be out of town at the time; she was thankful to Hamilton for saving her mother.

Hamilton is the Southeast Region winner of the Right at Home 2017 Caregiver of the Year award. Gregory Fulton, owner of Right at Home Hilton Head, South Carolina and Savannah, Georgia, says Hamilton always goes above and beyond for others.

“I think it’s a nice program,” Hamilton continues. “Employees should be rewarded for their service; for going above and beyond their call of duty; and for being honest, dependable, loving and caring.”

Hamilton joined Right at Home as a caregiver in 2014. Before entering the home care industry, she spent 17 years working in the accounting department of a resort and another eight years at the Department of Motor Vehicles.

When asked about how and why she became a professional caregiver, Hamilton says caring for her mother was the turning point. “My mother was diagnosed with renal failure in 2010,” says Hamilton. “Neither senior facilities nor nursing home was an option. I wanted to take care of my mother at home. The experience hit home so deeply that I decided to become a full-time caregiver. How I cared for my mother and what I would have wanted for her is exactly how I treat other seniors.”

Hamilton is constantly honing her skills in caregiving. “My skills gravitate toward seniors with dementia, and I’m glad that Right at Home offers in-service training in Alzheimer’s and dementia care,” says Hamilton.

“We partner with Memory Matters, an award-winning adult day program in Hilton Head Island, to provide Alzheimer’s education for our caregivers,” says Fulton. “Since a majority of our staff members have already received the training, we were recently promoted to become a Purple Angel Partner.”

“Besides memory care training, we also work with local hospice providers to educate our caregivers of the hospice framework as well as provide skills-based training,” continues Fulton. “Our caregivers are encouraged to take First Aid/CPR/AED classes from the American Red Cross. We offer sponsorships and subsidies for these programs.”

When Hamilton is not at work, she enjoys reading, fishing, cooking and playing computer games. She is also an active member at her church, Campbell AME Chapel. “My faith plays a big role in my life,” says Hamilton. “It grounds me in my caregiving. I love what I do. Seeing the smiles on the faces of the elderly I take care of gives me great satisfaction.”