Caregiving in the Time of Hurricane Harvey 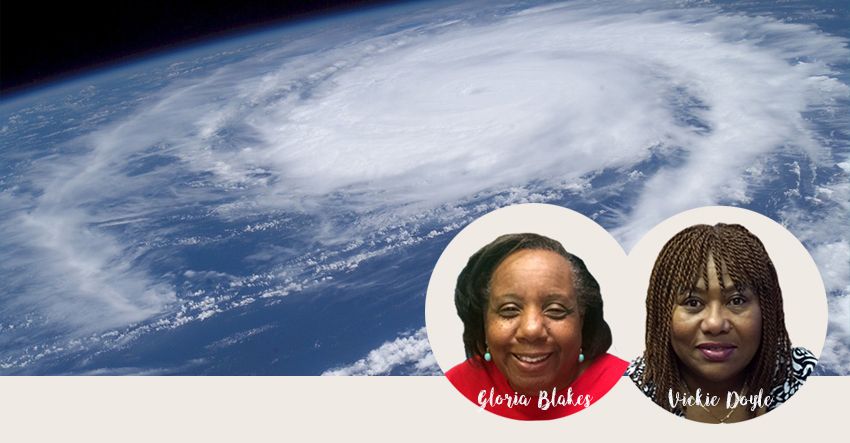 It was hard to predict the damage that Hurricane Harvey would inflict on Houston, Texas, and the surrounding area, but it became the costliest hurricane on record. For residents Gloria Blakes and Vickie Doyle, the looming storm couldn’t prevent them from doing their job as caregivers.

Gloria and Vickie have been caring for the same senior for a year, but until August 25, 2017 — the day Hurricane Harvey hit — the two Right at Home caregivers had never met in person.

Each woman works a 12-hour shift caring for their joint client at a healthcare unit. The client is wheelchair-bound, has chronic lung issues, shows signs of early-stage Alzheimer’s disease and requires 24-hour care. Gloria and Vickie never considered not showing up for work once they heard about the storm coming, as they both feel devoted to caring for their client.

The Calm Before the Storm

Gloria works the day shift, from 6 a.m. to 6 p.m., and although she knew that heavy rains were coming, she was not prepared for what ultimately was ahead of her. She did, however, pack a small bag before heading out for the morning, which she decided to keep in her car.

“The day before I went to work, the weathermen had predicted we would get a lot of rain,” says Gloria. “There was lots of rain before I even got to work that day, but nothing like the flooding we ended up having. I was prepared to work that day and go home as usual — I had no indication that I was going to have to stay. When Vickie arrived, I actually tried to leave but the staff at the facility told me I wouldn’t be able to get out. The whole thing was just very unpredictable.”

Because Vickie works the night shift, from 6 p.m. to 6 a.m., she had been able to prepare for potentially being stuck at work through the storm.

“I had heard from my manager, who told me to leave for work earlier than usual so I could get there ahead of the storm,” says Vickie. “It was impossible for Gloria to leave by the time I arrived. The facility made all of the necessary arrangements for our sleeping accommodations and hot meals.”

Vickie and Gloria ended up spending the next 72 hours together, waiting out the storm and helping their client feel comfortable and safe.

Caring for the Aged Through the Storm

“I was trained for teamwork and I believe that teamwork is an essential part of any job,” says Gloria. “Vickie and I worked together to do what was needed to take care of our client. It was unique … very hard to put into words because of the situation. We didn’t have access to much information about what was going on. We couldn’t see the water and had to depend on word of mouth.”

In addition to the heavy wind and rainfall that Hurricane Harvey brought to Houston, Vickie and Gloria experienced two tornado warnings while they were with their client. Each time, the staff had to get everyone out into the hallway safely and away from windows, without really explaining to anyone what was happening for fear of scaring them. There were times when even Gloria and Vickie were not sure if they would make it out of the situation.

“Gloria and I bonded through the experience — we were really in unison, working together,” says Vickie. “We didn’t know each other very well beforehand. It was a very humbling experience. We were just sort of barricaded in there. Since the family members couldn’t get there, we were trusted to care for their loved one during the storm.”

Their client was nonplussed throughout the entire experience, joking with Gloria and Vickie when they would have to go back out into the hall. Since their client’s family, who lives nearby, couldn’t get out to visit their loved one during the storm, Gloria and Vickie made the extra effort to prevent their client from feeling abandoned by her family during the crisis. “It could have been confusing and devastating to her if she were alone,” said Gloria.

Riding Out the Storm

After about 72 hours, Gloria and Vickie finally got the green light that it was safe to leave the facility and make the trek home. Luckily, Vickie drives a truck, so she was able to make it home despite the unprecedented flooding on the roads.

“I hadn’t really heard or seen anything for almost 72 hours, so when I left the facility, I was shocked by the absolute devastation — it looked like a war zone,” recalls Vickie. “I made it home, but as days went on it was just incredible to see the aftermath. Houses were ruined, cars were ruined, and there were nice appliances out on people’s lawns. I’d never seen anything like it.”

Gloria, unfortunately, wasn’t as lucky. Since her car wasn’t big enough to navigate the flooded roads, she was stuck an additional two days before she could return home.

Despite the trauma of experiencing a hurricane in a strange place, the women agree that neither of them would have done anything differently.

“If it happened again, I wouldn’t change a thing,” says Gloria.

Adds Vickie, “It’s a gift from God to be able to serve people in this capacity. It’s a real calling. You have to have true compassion, because it’s not about the money.”