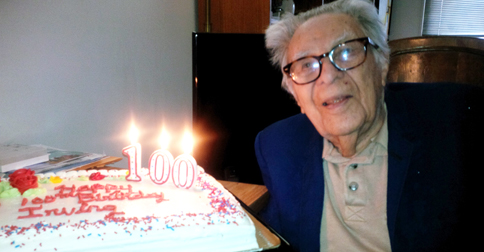 Published By Hilary Young on September 22, 2016

At 100 years old, Bronx resident Irving Ladimer is a real character. Warm, inviting and quick to crack jokes, it’s no wonder that the centenarian has become an integral and valued part of his local community.

After a lifetime of traveling for work, Ladimer finally settled down in the Bronx over 24 years ago. He has spent his years in “retirement” as an active member of the Bronx Community Board, and worked hard to establish the Aging Committee, which did not exist when he took the position over 24 years ago.

“My goal is really to encourage older people to not just participate in the community but to participate as leaders and contributors,” says Ladimer. “Older people are more than just receivers of care. They have a lot to offer in terms of overall community improvement.”

And Ladimer knows a thing or two about improving people’s lives, as he has devoted nearly his entire life to helping others. In fact, he may have helped you at some point, without even knowing it.

Eventually, he moved back to Washington, D.C., to work in the White House during the Truman administration. Ladimer was assigned to the President’s Scientific Research Board, where he and his co-workers developed the National Science Foundation. The original mission of the NSF was “to promote the progress of science [and] to advance the national health, prosperity, and welfare” for millions of Americans.

After leaving his career in Washington, Ladimer moved back to New York City, settling down in the Bronx community of Riverdale. Although he was 76 years old, Ladimer refused to rest in retirement, and worked with the City of New York to develop health surveys that helped assess the needs of children. He was also an early champion of providing the elderly with the proper psychiatric care from various government agencies and helped organize the Mental Health Association in the Bronx, where he still sits as an emeritus board member.

A New Chapter in the Bronx

It’s fair to say that life in the Bronx has gotten better since Ladimer’s arrival nearly a quarter-century ago. When asked about his greatest accomplishment in the community, the centenarian responded, without hesitation, that it is the manual he created about how the Bronx Community Board works. He thought the language of the by-laws were too complicated, so he took it upon himself to help people understand them in layman’s terms. His goal was to get more people — with diverse backgrounds — involved with the community.

Ladimer’s optimism and enthusiasm for community involvement seem to be contagious. Enrie Morales, President of Right at Home Bronx, has known Ladimer for over a decade. Morales has helped Ladimer recover from several stints in the hospital, and the two have become great friends. Ladimer even convinced Morales to get involved with the Bronx Community Board, and she now serves on the Aging Committee. 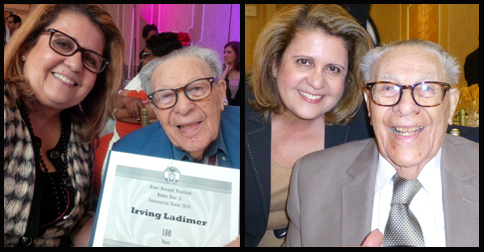 A Centenarian’s Words on Aging Well

March 2016 marked Ladimer’s 100th birthday. When asked if he ever truly plans to retire, Ladimer responded by saying that retirement can be an extension of your life’s work and “also serve as wish fulfillment to achieve great things for yourself and for others.”

As for his tips on aging well? Surprisingly, Ladimer doesn’t have any. When asked about how he lived to be 100, he simply cracks a joke and replies, “Well, first I had to make it to 99.”

One thing about this centenarian is clear, however: age never slowed him down. He has a strong desire to keep learning, participating and engaging in the world around him. Perhaps that is actually his greatest tip for how to age well.

“People waste their later years because they feel defeated by age, or by health,” says Ladimer. “But there are still ways they can create change. It’s never too late for change.”