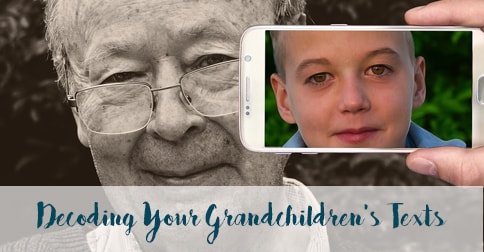 The way humans communicate has come a long way in the last 100 years. A house-based rotary telephone served as the main form of communication for the majority of the 20th century. But as the cellular telephone gained mainstream traction in the late 1990s, the new millennium ushered in a new type of communication: the text message.

Texting now seems to be the preferred method of communication for multiple generations. And with the rise of the text message, a new language was born. Using a collection of acronyms and images (called “emojis”), this popular new way to communicate has left many parents and grandparents scratching their heads. If you feel as though you could use a “text message translator,” you’re not alone. We’ve made a short list of what you’ll need to know to communicate better with the young people in your lives. It also might earn you some cool points with the grandkids!

This is perhaps the most popular text acronym, which has found its way into the mainstream vernacular. It means “laugh out loud.”

“JK” is shorthand for “just kidding,” and may often serve as a follow-up to “LOL.”

If someone texts you this acronym during your conversation, don’t panic. It’s not a typo—it stands for “be right back.”

Both of these mean “I love you.” Hopefully, your children and grandchildren are texting this acronym to you regularly!

If your conversation ends with either of these, someone is sending you “hugs and kisses.”

A popular phrase among teenagers: “I don’t know.”

The irony may be lost on some that this acronym means “in real life,” as in something that’s not happening on your computer or cellphone.

If you tend to over-share information with a loved one or friend, they might respond with this acronym, which means “too much information.”

There are many, many more acronyms and emoji images that could potentially confuse you during a text message conversation with a younger person. If it’s ever a challenge for you to decode what they are saying, encourage them to explain it to you and teach you how to speak the language. You might be surprised to find that you love it IRL!