From Raising a Son With Functional Needs to Caring for Elders 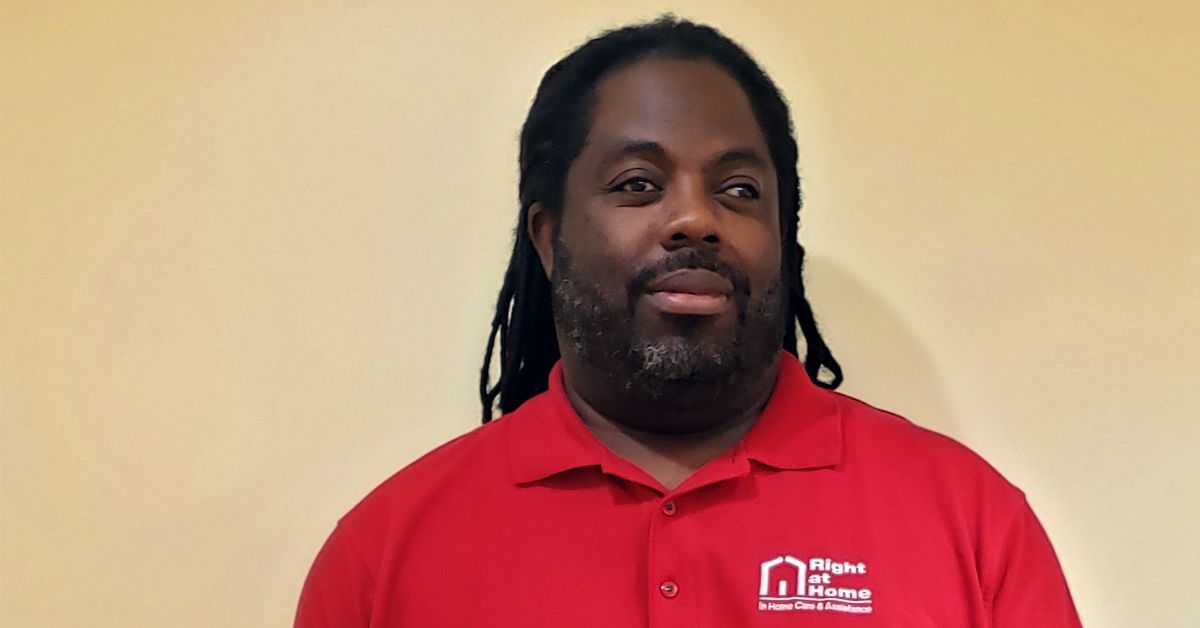 Larry Bell has always had the capacity and disposition to be a caregiver, he just didn’t really ever think he would be able to make a career out of it. His son, who is now 26 years old, was born with a condition called hydrocephalus and uses a wheelchair. As a young father, Bell made every effort to take care of his son. One day, while the two were waiting to see a doctor, a woman approached Bell to commend him on being such an attentive caregiver. When he explained that he was, in fact, the boy’s father, the woman suggested that he work for her as a caregiver and handed him her card.

“I owned an automotive detailing business at the time, so I had no intention of calling her,” recalls Bell. “But six months later, I found myself thinking about that interaction and about doing something with my life that would have more meaning, and I gave her a call. She hired me to work weekends at a group home for mentally disabled young men. Before long, I was doing it full time.”

Bell was trained as a Certified Nursing Assistant, and eventually became a manager of several group homes. In 2011, he decided it was time for a change and reached out to Right at Home North Atlanta about a live-in caregiving position for a client with dementia. He was hired almost immediately.

Bell found his transition to senior care to be pretty seamless—still tapping into the same patience, respect and love for his clients that he demonstrated while working with mentally disabled young men. As a caregiver for older adults, Bell specializes in dementia and Alzheimer’s care, which, he says, requires understanding and a nonjudgmental attitude.

“You need to be patient and calm,” says Bell. “You can’t get upset if they repeat themselves or ask a lot of questions. Being a good caregiver for someone with dementia is simple—treat them as you would your own family member, with dignity and respect.”

When he first started working for Right at Home, Bell lived with a male client with dementia. As with many people living with dementia, his client would have good days and bad days. On a bad day, he would become agitated and refuse to take his medication.

“One day, after a struggle to get him to take his medication that didn’t end in my favor, he went to the front door and started screaming that there was an intruder in the house who was trying to kill him,” recalls Bell. “Some women came to the house to see what was going on and were taken aback when they saw me standing there. I tried to explain what was going on and calm the situation, but it continued to escalate.”

Contrary to what many might think, Bell encouraged the women to call the police, figuring that they’d realize he was the man’s caregiver. Ultimately, Bell wanted EMT services to come help his client calm down and take his meds. But when the police showed up to the house, the scene did not play out as Bell had hoped.

“The policemen asked to see my I.D. and really didn’t believe I was a caregiver,” remembers Bell. “Eventually, everything was sorted out and I was finally able to get my client to calm down. He felt very remorseful about the whole thing after the fact, but I assured him it was all right. I knew it must be scary for him to have moments where he doesn’t know what’s happening.”

Not Your Typical Caregiver

Bell knows that people are often wary of him when he first tells them he is a caregiver. In fact, a woman at a senior community where one of Bell’s clients lived had called Susan Brown, owner of Right at Home North Atlanta, to complain about Bell, whom the woman had never spoken to and had only seen in the lobby of the community.

“She called to complain because my skin color and gender made her uncomfortable, but those aren’t valid complaints that get logged by our office,” Bell says. “Once, during a snowstorm, the woman had no choice but to accept care from me because I was the only caregiver in the building. She put up a fight but eventually she agreed to have me help her.”

Bell remembers the initial encounter being quiet and awkward, but he tried to break the tension with kindness. He explained to her everything he was going to do before doing it, and chose to undress her from the back to help her feel more comfortable.

“She didn’t say a whole lot to me that night but she did thank me for my help before I left,” Bell says. “The next day, Susan called to tell me that the woman had called her to sing my praises and requested that I become her sole caregiver! I accepted and worked as her personal caregiver for over two years. We became great friends, and she and her family even attended my wedding.”

What You Do Matters

Bell credits his wonderful relationships with his clients with an overall approach to life.

“The way you treat people matters,” he says. “It can have a positive impact on both lives.”

He also has a true passion for caregiving, so much so that he says he feels it in his heart every day.

“As a child, my grandfather would always tell me that when I grew up, I should find a job I really loved and I’d never actually work a day in my life,” Bell says. “I didn’t understand that sentiment until I became a caregiver. I feel that way every day—I look forward to work. Sure, I get busy and I get tired, but it never feels like work where I’m looking at my watch and wanting to leave. I really just love what I do.”

It’s probably no surprise that Bell has been a two-time finalist for National Caregiver of the Year, which is awarded by the Right at Home corporate office. Bell’s purpose-driven work is a testament to Right at Home’s mission, “to improve the quality of life for those we serve.”