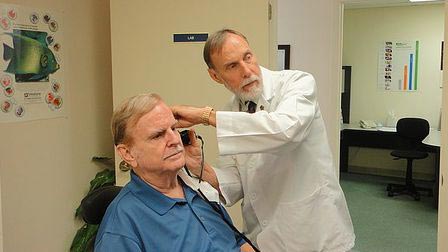 Decreased hearing may increase the risk for cognitive decline and even dementia. Continuing research finds that limited hearing is connected to brain health, and adults with hearing deficits are more likely to develop dementia than adults with normal hearing.

Hearing loss affects more than 48 million Americans. The National Institutes of Health estimates that a third of U.S. adults age 65-74 and up to half of adults over age 75 have measurable hearing impairment.

A team of ear disease scientists at Johns Hopkins University in Baltimore, Maryland, has conducted a number of studies on the connection between hearing and brain processing. For six years, the researchers tracked the brain abilities of almost 2,000 senior adults with an average age of 77. The testing included a focus on the elder’s memory, concentration and planning skills. Participants with hearing deficits that affected everyday conversations were shown to have a 24 percent higher risk for cognitive slowing than those with normal hearing. The study indicates that hearing loss accelerates cognitive decline associated with aging.

In another study, researchers monitored the cognitive health of 629 people for about 12 years. In a 2011 report, the scientists noted that the chance for developing dementia increased with more significant hearing loss. Test volunteers with moderate hearing difficulty proved triple the risk for dementia. Researchers stress that increased risk does not automatically equate with developing brain dysfunction, but the findings do beg for additional auditory-cognition investigation.

Cochlear Implant and Improvement in Thinking and Memory

Medical clinicians believe hearing loss can lead to mental decline because constant straining to understand sounds stresses the brain. Scientists suspect that over time, the brain wears down from the extra cognitive load. Specific brain imaging shows that older adults with hearing loss have fewer nerve connections or gray matter where the brain receives and processes external sounds. Another factor for the hearing-cognitive decline is how older adults socialize when they can no longer clearly hear conversations. People with hearing deficiencies tend to withdraw from social situations, and social isolation is a long-recognized risk for mental slowing and dementia.

A 2015 study in France followed 94 people age 65-85 with profound deafness in at least one ear. Each participant received a cochlear implant and follow-up auditory rehabilitation. One year after implantation, those with the lowest auditory scores showed more than 80 percent improvement in thinking and memory.

Many audiology clinics offer free basic hearing tests for seniors. Proactively getting treatment and hearing aids could help prevent and lessen cognitive issues with aging. If you or a loved one is experiencing hearing loss, it may be time to find out more about audiology treatment and/or hearing aids.