Home Remedies for Aches and Pains of Aging 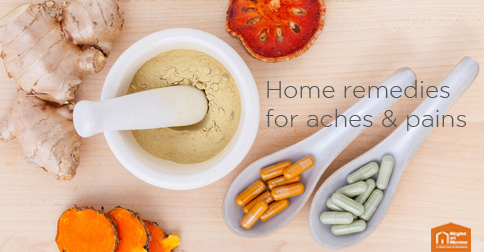 The catch in the knee, the aching back. As baby boomers age (the Americans born between 1946 and 1964), the management of everyday aches and pains becomes more of a reality and a debilitating nuisance for many. A 2012 National Health Interview Study found that 11.2 percent of adults report having daily pain. To ease the discomfort of predominantly musculoskeletal pain from common conditions such as arthritis, stiff neck and headache, the Centers for Disease Control and Prevention reports that up to 11.5 million of U.S. adults in 2015 were prescribed long-term painkiller therapy.

But a new awareness is arising among older adults: natural pain relief. From herbs that reduce inflammation to acupuncture, American seniors are taking back their health from the confines of pain with aging. The following are popular at-home natural pain cures:

Turmeric: The spice that gives Indian curry and other foods its yellow color, turmeric contains curcumin, a natural antioxidant that helps fight against cell and tissue damage in the body.

Willow bark: Centuries ago, people chewed the bark of the white willow tree to ease inflammation. Today, the natural medicinal is sold as a dried herb and brewed like tea. Willow bark contains the chemical salicin, which is similar to aspirin’s main ingredient.

Natural painkillers often help instead of turning to pharmacological solutions, but if pain is persistent and severe, seek medical attention.

What natural pain reliefs have you found most effective?