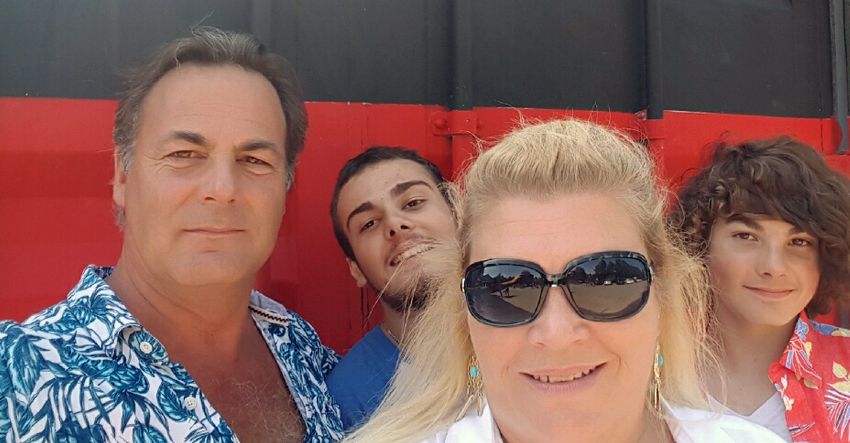 Kim Schirrman, an award-winning caregiver for Right at Home of North Shore Long Island with 40 years of experience under her belt, had never heard of Huntington’s disease before meeting her husband and his family in 1995. Kim’s husband has a family history of Huntington’s disease, and when she met his family at a bar-b-que all those years ago, his sister had recently been diagnosed with the disease that their mother was already struggling with.

“It is really heart-wrenching to watch people live with this disease,” says Kim. “It’s hard to see someone, like my sister-in-law, who was so full of life, so beautiful and so vibrant, just disintegrate pretty quickly after a diagnosis.”

Huntington’s disease is a rare and fatal genetic disease that currently has no known cure. Approximately 30,000 people are living with the disease, and most people are not diagnosed until they are in their 30s or 40s, as symptoms do not typically appear before then. Because it affects a relatively small portion of the population, many people are not aware of the disease until they personally experience it.

What Exactly Is Huntington’s Disease?

Huntington’s disease causes the progressive breakdown of nerve cells in the brain. This degeneration causes a domino effect throughout the body, deteriorating muscles and movement, speech, and cognitive ability, and even leading to psychiatric disorders. Women typically start showing signs of the disease between the ages of 32 and 35, whereas men do not start seeing symptoms until they are closer to age 40.

Most people who have a family history of Huntington’s disease know that a diagnosis is looming, as it is a genetic condition. A child whose parent has Huntington’s disease has a 50 percent chance of developing the disease. The Huntington’s Disease Society of America estimates that roughly 200,000 people are at risk of inheriting the disease. Symptoms can appear in the form of personality changes and mood swings, involuntary movements and imbalance, forgetfulness and impaired judgment, and slurred speech and difficulty swallowing. Symptoms typically worsen over a 10- to 25-year period.

According to the Mayo Clinic, a diagnosis of Huntington’s disease is “based primarily on your answers to questions, a general physical exam, a review of your family history, and neurological and psychiatric examinations.” Once you have received a positive diagnosis for the disease, there are no courses of treatment that can prevent the disease from progressing. There are, however, medications that can lessen the severity of some of the symptoms, specifically the psychiatric disorders and the involuntary movements.

“The disease progresses for everyone differently, so some people may be able to receive care at home after an initial diagnosis, but it’s really hard to treat the disease at home as it progresses,” Kim says. “You really need to enlist high-quality medical treatment and care in order to improve their quality of life.”

It’s not uncommon for those living with Huntington’s disease to ultimately pass away from outside complications, such as pneumonia, urinary tract infections, fall-related injuries and complications from the inability to swallow. This is why many experts recommend seeking treatment at a medical facility that specializes in Huntington’s disease care.

Raising Awareness for a Good Cause

In addition to Kim’s mother-in-law and sister-in-law passing away from Huntington’s, the disease has also taken her husband’s grandmother, aunt and five cousins. Raising awareness for Huntington’s disease is a high priority for Kim and her family. Every year, they participate in the Huntington’s disease walk in Belmont State Park to raise money to help fund research for a cure and improved medications.

In addition to raising awareness and money, Kim wants people to know that if you have a loved one who is diagnosed with the disease, you can be supportive by not treating them like they’re sick. It will help preserve their dignity and their sense of normalcy until the disease progresses to a point where they need round-the-clock medical attention.

“Our lives have been forever touched by Huntington’s disease, but the one thing I’ve learned from it is that you just have to live your life every day and cherish every day you have,” says Kim. “Before I had children, people used to ask if I was worried that the Huntington gene would be passed on. At that point, my husband could have been a carrier of the gene, although he is not. And I always replied that I wouldn’t deprive myself of a family because there’s a chance of developing the disease — there are all sorts of things that can go wrong or happen over time anyway.”

Today, Kim has four grown, healthy children. One of her daughters is the head coordinator for the Greater New York/New Jersey chapter of the Huntington’s Disease Society of America. “Everyone is always dealing with something, and you can let it bring you down or you can choose to get through every day wanting to live,” says Kim. “Get a great support system, wake up with a positive attitude, and just be grateful for every day you have here on Earth.”