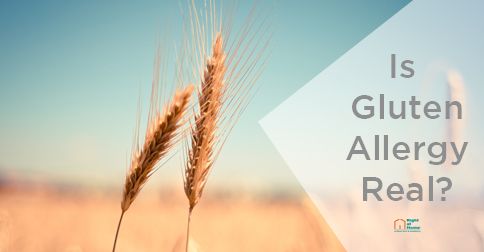 “I know a lot of people say that a gluten allergy is a made-up thing,” says Amy Stanosheck, RN, BSN, JD, CFE, Director of Franchise Standards at Right at Home. “I’ve heard that you shouldn’t take gluten out of your diet unless you have been diagnosed with celiac disease, which is an autoimmune disorder of an intolerance to gluten, but that’s not the case.”

Can Thyroid and Autoimmune Issues Be Caused by Gluten Allergy?

Two years ago, Stanosheck was pregnant with her second child. During her second trimester, she felt a lump on her neck. From her experience as a nurse, she knew there was something on her thyroid. “I immediately went to a doctor and had a biopsy,” says Stanosheck. “They wanted to remove the tumor because it was growing pretty fast and pushing on my vocal cords. I asked, ‘Why do I have this?’ and the response was, ‘We don’t know. Lots of people get these tumors on their thyroids.’”

Stanosheck was not satisfied with the answer, but she felt better after the tumor was removed. She felt pretty good until about six months ago, when she started to feel very tired, foggy and could not stay up past 7:30 or 8:00 at night.

She went back to the doctor to figure out what was going on. All of her blood levels from her thyroid were normal this time. Her doctor said that everything was fine, and she was simply overworked. But Stanosheck decided to take it upon herself to find the root causes of her symptoms—brain fog, difficulty concentrating, joint pain, low energy, inability to lose weight, bloating, and a strange pain in her abdomen that could not be diagnosed even with ultrasound.

She began to research extensively thyroid and autoimmune issues. One of the primary causes, Stanosheck found, was diet. “Your diet can either be your slowest poison, or your best medicine,” says Stanosheck. “And particularly, one of the main issues that affects your thyroid is gluten.”

Finding the Root Cause of Disease

While Western medicine is usually spot on, health insurance is not set up to apply a holistic lens to patients that helps them achieve “wellness care.” When Stanosheck visited her physician six months ago, her thyroid levels were taken and fit within the normal range. Without doing a full panel of tests, however, there was no way to tell if her thyroid hormones were functioning properly as they should.

“Thyroid stimulating hormone (TSH) stimulates the conversion of thyroxine (T4) to triiodothyronine (T3) in the intestines,” says Stanosheck. When the intestines are irritated and inflamed by food allergens, the T4-to-T3 conversion does not happen. “You can have all the thyroid hormones floating around in your body, but you cannot use them for energy and metabolism.”

Stanosheck sought help from a functional medicine doctor, who spent two hours going through her medical history and put her on an elimination diet. An elimination diet involves removing specific foods for a period of at least 30 days. If the symptoms improve during the elimination, patients take stock, then re-introduce the food items to their diet and see if the symptoms come back.

Within a week after Stanosheck removed gluten from her diet, her symptoms improved. She then moved on to eliminate other things from her diet, including dairy, and felt her energy surging back. Her next step was to repair her gut. Her doctor put her on good probiotics—ones that contain no less than 50 billion colony-forming units (CFUs) of active bacterial cultures.

“Throughout the years, I had different signs or symptoms of this underlying issue that I didn’t recognize until now,” says Stanosheck. “They didn’t affect me until I had a big tumor on my thyroid. People should listen to their bodies. If they are having pain or are feeling a certain way, seek answers and don’t stop. Try to figure out what the causes are.”

Women are more susceptible to thyroid and autoimmune issues, but Stanosheck cautioned that taking prescribed medicines that mask the symptoms without knowing the real cause can be problematic down the road. “If you are someone with an autoimmune issue, it can potentially cause dementia later on, as research now shows that autoimmune disorders are one of the main causes of the condition,” says Stanosheck.

“Maybe in 10 years, healthcare will focus more on root causes and use diet as the medicine,” Stanosheck continues. “The balance is finding a way to work within the confines of Western medicine as well as outside it, and kind of work together from that perspective.”

Related Reading: To improve patient diets, the doctor is in... the kitchen