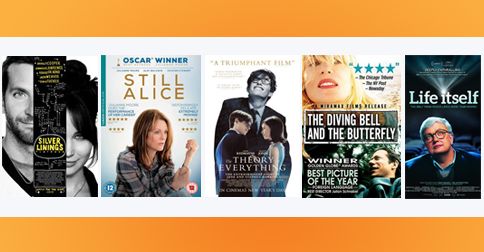 Movies about caring for a loved one stir a special empathy and connection, often inviting us to chuckle and tear up with the films’ characters. Here, we list five top caregiving movies that highlight the strength and love that flourish when life takes an unexpected turn.

Caring for an adult with mental illness

Pat Solitano, Jr. (Bradley Cooper) was admitted to a mental health facility for bipolar disorder. His mother decided to take her son home against medical advice and without her husband’s knowledge. The couple faced difficulties dealing with their son’s mental illness, until a girl, Tiffany (Jennifer Lawrence), who was also battling a mental illness (depression), showed up in Pat’s life.

Though not completely realistic, the movie does offer a glimpse into the challenges family caregivers face when caring for adults with mental health issues. It also addresses that having a strategy and a support system are both beneficial in helping patients with mental illness.

Caring for a spouse/parent with early-onset Alzheimer’s

Julianne Moore’s award-winning performance in the movie demonstrates the cognitive decline Alzheimer’s patients experience and the challenges family caregivers must tackle on a daily basis.

Caring for a disabled adult

After Cambridge University astrophysics student Stephen Hawking (Eddie Redmayne) is diagnosed with amyotrophic lateral sclerosis (ALS), also known as Lou Gehrig’s disease, he turns reclusive. But literature student Jane Wilde (Felicity Jones) falls in love with him and decides to marry him when she finds out Stephen only has two years to live. Jane eventually delays her own goals to become a full-time caregiver for Stephen.

Felicity Jones’ role shows the emotional side of caregiving. Managing caregiver guilt, stress and exhaustion can be difficult, but it’s important for caregivers to replenish before taking care of others.

Caring for a stroke patient

The film drama is a real-life account of Jean-Dominique Bauby and his indomitable spirit after a massive stroke left him paralyzed with locked-in syndrome. Unable to speak, the former French “Elle” magazine editor-in-chief composes his “The Diving Bell and the Butterfly” book with the painstaking aid of his speech and language therapist reading a list of letters and Bauby blinking his left eyelid to spell out words.

The biographical movie illustrates how Bauby’s children, his girlfriend/mother of his children and his former wife all come together to undergird him through his unthinkable hardship. It shows that caregiving does take a village.

Caring for a cancer patient

Pulitzer Prize-winning film critic Roger Ebert is one of history’s most commendable social commentators and an inspiring model of a life well-lived. Although his head and neck malignancy robbed Ebert of his commanding speech, the famed historian and author never lost his voice in influencing his diverse audience.

Based on Ebert’s bestselling memoir “Life Itself,” the documentary portrays how to combat cancer with help from a network of family and friends.