We Can All Help Overcome Ageism

In a recent poll conducted by University of Michigan public health experts, 80% of older adults reported that they commonly experience ageism in their day-to-day lives, including ageist messages and ageism in interpersonal interactions. Many even reported experiencing internalized ageism, recognizing that they had come to believe the negative stereotypes.

Many people today are focused on reducing inequality, systemic discrimination and microaggressions. Yet experts say that ageism seems to be “the last acceptable prejudice.” We even see this play out in conversations about equality, with suggestions that all older adults are bigots or concerns dismissed with “OK, boomer.”

But times are changing. Pitting generation against generation is unhealthy for our culture, and more people are making an effort to examine and discard stereotypes about older adults. For everyone, there are great reasons to eliminate ageism.

Ageism affects health. The University of Michigan poll found a correlation between the amount of ageism an older person experiences and their likelihood of having a chronic health condition. For example, living with the effects of prejudice is stressful, and stress raises the risk of heart disease, depression, dementia and disability. And older adults with internalized ageist attitudes might believe that health problems are “typical, just a part of growing older” rather than conditions that can be addressed and overcome.

Ageism is an added burden for people living with other forms of prejudice. In 2020, the American Geriatrics Society announced a new initiative “addressing the intersection of structural racism and ageism in health care.” A recent AARP poll found that 95% of older Black Americans say racism is a big problem in the U.S., and among those, one-quarter report that age discrimination further negatively affects their well-being. For example, a Black person who faces employment bias could be even more disadvantaged by age discrimination.

Negative effects of ageism begin early in life. Prof. Becca Levy of the Yale School of Public Health, who has done much research on the effects of ageism, warns that when young people hold negative attitudes about older adults and aging, they are more likely to face poor health and disability in their own later years—as Levy said, “maturing into the very people they have been unkindly caricaturing.”

Governments and advocacy groups are taking steps to reduce ageism in the U.S. and globally. And change begins on the individual level, with each of us. Here are some suggestions from advocates:

Seek out positive images of aging. The University of Michigan study participants who spent the most time surfing the web and watching TV reported the highest level of exposure to ageist stereotypes. This isn’t surprising. A recent study of top-grossing movies found that only 10% featured actors older than 60, and many of those actors were cast in stereotyped roles. “Seniors are rarely seen on screen, and when they are, they are ridiculed,” said Dr. Stacy Smith of the University of Southern California. “When did we become a society that is comfortable with subtle and stigmatizing stereotypes about a group that have long served as the pillars and stalwarts of our communities?” Fortunately, that tide might be turning. For example, entertainment executive and producer Amy Baer has just launched Landline Pictures, a company specializing in inspiring films about older adults.

Encourage intergenerational contact. Just as is true with other forms of prejudice, interaction between groups helps break down stereotypes. “If we teach people more about aging—if they’re less frightened of it, less negative about it and less uncomfortable interacting with older people—that helps,” said Cornell University gerontologist Karl Pillemer. “If we get them into contact with older people, where they’re getting to know each other, that also helps. And if you put those two things together, we found that works best of all.”

Teach visualization. Ageism has been called “prejudice against our future self.” Using technologies and education, experts are helping younger people envision their older years. This motivates them to plan for their future, and in the process understand and empathize with older adults. It also could provide optimism about the future—for example, learning that the older adults in the University of Michigan poll felt more comfortable just being themselves in their later years, had a strong sense of purpose, and reported that their life was better than they had thought it would be!

If you see something, say something. Today more people are challenging each other to consider their biases. If someone makes an ageist comment, bring it up just as you would a racist remark. Discuss it, examine it. It can be a stimulating, illuminating topic! There’s a thin line between good-natured humor that humanizes versus that which marginalizes. Before sharing that “over the hill” birthday card, or telling a joke about a confused elder, ask yourself if it is funny or unkind. These conversations can change attitudes and bring real change—a social justice movement most everyone can surely support.

What Is Ageism and How Do We Tackle It?

The WHO Global Campaign to Combat Ageism “aims to build a world for all ages by changing the way we think, feel and act towards age and aging.” 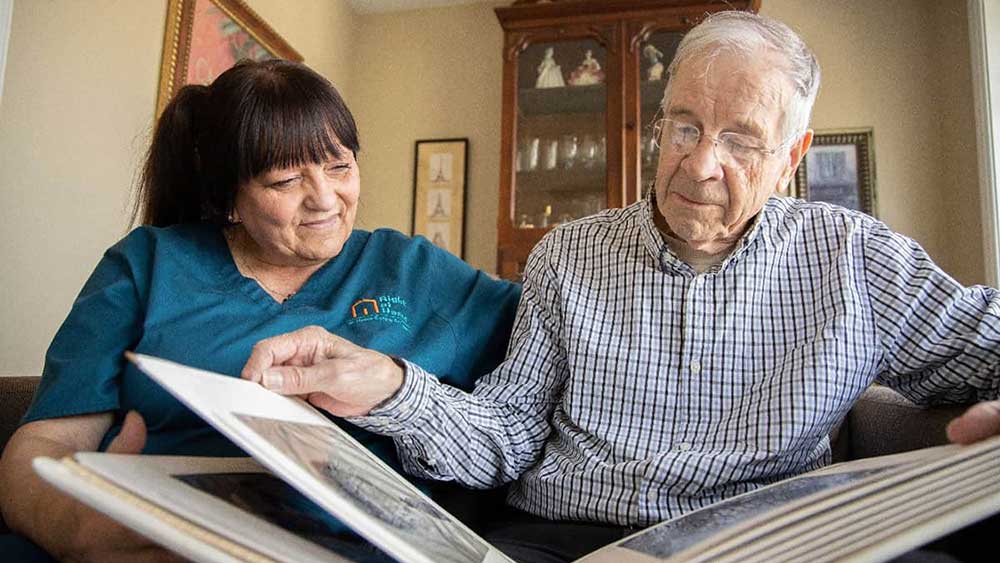 Reminiscing is a vital process of aging and should be encouraged. Learn its many benefits and how to encourage your loved ones.
Read more