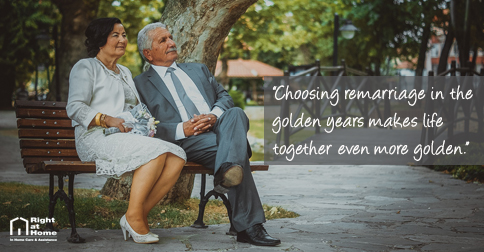 John and Carol met through ballroom dance lessons after both of their spouses died. Retirees and grandparents, the couple fell in love and remarried in their late 60s. Their later life romance fits the U.S. Census Bureau demographic that about one in five Americans—roughly 20 percent—have been married two or more times. Although marriage has declined overall in the country since the 1960s, the Census Bureau’s latest American Community Survey (ACS) also notes that remarriage for older adults is on the rise.

In analyzing the ACS data, the Pew Research Center reports that almost 42 million U.S. adults have wed more than once, almost double the number in 1980 and triple since 1960. The Pew Research Center notes that with newly remarried couples, roughly 16 percent of them include a husband who is at least 10 years older than his bride.

The widowhood rates for women age 65 and older are three times higher than for senior men. Women tend to outlive men, so this increases the number of elderly women available to remarry. In 2010, women 65 and older comprised 57 percent of the country’s population.

With more older couples saying “I do” for at least a second time, and many bringing along relationship habits in need of a tune-up, AARP offers a number of secrets to a happier marriage including the following:

Of previously married single adults nationwide, about half say they would like to wed again or are keeping the possibility open. For many divorced or widowed older adults, choosing remarriage in the golden years makes life together even more golden.

What do you think helps remarriage work well for older couples?