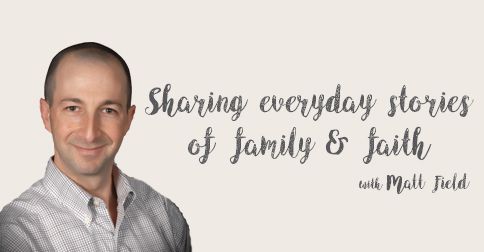 Looking back on his almost 10 years as a rabbi in western New York, Matt Field fondly recalls an older woman in his bar and bat mitzvah class for adults. “I’d describe Maxine as the perfect woman,” says Matt. “She was a fantastic wife, mother and grandmother. Maxine took such an interest in everybody. She was nice, and she was smart. Everything about Maxine was giving.”

Matt’s voice trails off a bit when he explains more about this much-loved senior. One morning, Maxine suffered a stroke and died three days later. About a year after her passing, Matt found an audio recording of a class presentation by Maxine and passed along the recorded talk to Maxine’s family. “Hearing her voice meant so much to the family,” Matt says. “It was like having her back for a day.”

Matt sees similarities between his past rabbinical work and his career today as the owner and managing director of Right at Home in north suburban Chicago, working alongside his wife and business partner, Rachel. Helping preserve family stories and memories is central to both the Fields’ Jewish life and their in-home caregiving services.

“We’re dealing with individuals and families who are going through similar circumstances that I saw as a rabbi—illness, emotions and family dynamics,” Matt says. “As a rabbi in an aging town, I spent a lot of time preparing for and doing funerals. I would often sit around the table talking with families about their loved one. For those who talked warmly and lovingly about what mark their loved one left, their words would inspire me and move me to ask myself, ‘What do I want my family to say about me, and what am I going to do to influence that?’”

When talking with care clients and their families around the table today, Matt sees the range of relational stress to sweet recollections.

“Sometimes there’s a lot of anger and dysfunction among siblings, and sometimes there’s great cohesiveness and they want to rally for the best interest of their parents, who are in need, who are vulnerable,” Matt explains. “I like to actively listen and then we’ll start talking about their family stories. Being able to reflect on the history of a loved one in a warm and loving way is very important to people.”

Matt relates his clients’ cherished storytelling to his own family and faith, especially as the Passover holiday approaches.

“A big part of Jewish identity is oral history” says Matt. “We tell stories. And for the Jewish religion, there’s two versions of the Bible, per se. There’s the actual written Bible, and there’s what we call the oral tradition, which is the Talmud and beyond. When these texts and laws were initially developed, it was the job of some people to memorize the words and repeat them. These individuals were called the Hebrew word that translates as ‘repeaters’ because they repeated the words and verses over and over until they memorized them and passed them down generation to generation.”

Matt shares how the Passover story of when the Jewish people were freed from slavery in Egypt—the Exodus—is still celebrated and communicated by Jewish families worldwide. During a Passover Seder meal, Jewish families gather around the table, enjoy food traditions, read from prayer books and verbally recount the Exodus story.

“The oral tradition is part of the requirement—not just to read the story,” Matt states. “And there’s something about telling a story versus reading it because you can be a bit more personal and passionate and make points more interesting and alive for the children. Around a lot of tables, you often have families sharing their own stories. Ultimately, I think that’s what makes family times most memorable.”

A couple of years ago at Passover, Rachel’s grandmother told how her Jewish family escaped Germany for the United States just before the Holocaust. With Matt and Rachel’s two young daughters listening intently, their great-grandmother explained more of the family’s lineage.

In preserving family stories, even the more sobering moments, Matt values the significance of recording personal legacies. He has volunteered with the Shoah Foundation, helping complete video interviews with survivors and witnesses of the Holocaust (Shoah). Matt also recommends public services like StoryCorps, which records the spoken stories of individuals to share via podcasts, audio books and other listening venues.

For the myriad of families Rachel and Matt serve through Right at Home, Matt also points to simply asking questions of elders during family celebrations and holidays. Pressing “record” on today’s electronic devices make it easy to turn verbal recollections into audio and digital memories for generations to come.

“Preserving stories is very moving,” Matt adds, thinking back to the family of Maxine and that audio-recorded piece of her life. “In Judaism, in traditional burial, a person is buried in a white linen shroud, and that shroud intentionally is knit without pockets, because when you leave, you don’t take anything with you. The history of a loved one is really the legacy of what’s left behind.”