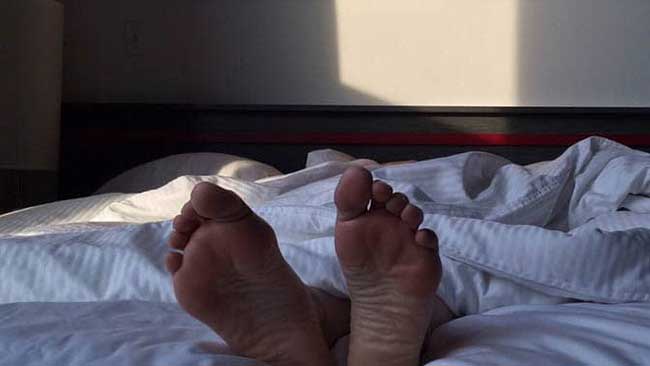 It’s hard to dispute the benefits of a good night’s sleep. Sleep, or lack thereof, can affect everything from your weight, to your emotions, to your cognitive abilities. If your sleep is disrupted during the night, chances are you’re not going to be functioning at your best level the next day. Sleep apnea is a sleep disorder that does just that—it disrupts your sleep by interrupting your breathing throughout the night.

And while sleep apnea affects people of all ages, the risk is generally higher over the age of 40. It has also been linked to an early onset of Alzheimer’s disease, which is why it is important for seniors to become educated about this treatable disorder. We spoke with Lorraine Grote Johnson, a registered nurse and Right at Home’s Director of Care Quality, who has not only come across seniors with sleep apnea in her professional life, but has also been affected by it personally, as her husband has been diagnosed with the sleep disorder.

What Is Sleep Apnea?

According to the National Institutes of Health, sleep apnea pauses your breathing for as little as a few seconds to as much as a few minutes.

“Your central nervous system has an automatic response to help you breathe at night,” says Lorraine. “But sleep apnea creates dysfunction with that mechanism, forcing you to literally stop breathing for stretches of time.”

Because it occurs during sleep, sleep apnea can be difficult to diagnose unless a spouse or family member witnesses your sleep disturbances throughout the night. Sleep apnea is typically a chronic condition that results in poor sleep quality, so if you live alone and find yourself fatigued and foggy every day, it might be time to talk to your doctor about testing you for the disorder.

What Are the Risks Associated With Sleep Apnea?

Aside from the fatigue and cognitive fog, sleep apnea for seniors can also have some pretty grave health consequences, including high blood pressure, heart attack, diabetes and stroke.

Another little known side effect for men, Lorraine tells us, is sexual dysfunction. Disrupted sleep can contribute to a variety of issues, from erectile dysfunction to lowered libido, because the hormones that typically regulate these functions can get thrown for a loop with a lack of sleep.

The hormones that regulate metabolism and feelings of hunger also don’t function properly when your body is deprived of a good night’s sleep, so obesity is another risk factor when it comes to sleep apnea.

Can Sleep Apnea Be Treated?

Sleep apnea can be treated, but only if you speak up and tell your doctor that you think you might be suffering from the sleep disorder. Unfortunately, doctors cannot usually detect the condition during routine office visits, Lorraine tells us.

“A family member or bed partner might be the first to notice signs of sleep apnea,” Lorraine says. “It only occurs during sleep. Once the doctor is aware of experiences noted from the bed partner or symptoms of daytime sleepiness, a sleep study will be ordered to diagnose sleep apnea.”

If you receive an official diagnosis for sleep apnea, you’ll most likely be fitted for a CPAP, or Continuous Positive Airway Pressure, which seems intimidating at first but will help you sleep like a baby.

“People are always amazed at the difference in sleep quality and functionality after a good night’s sleep with a CPAP,” says Lorraine.