3 Tips to Successful Travel With Grandchildren 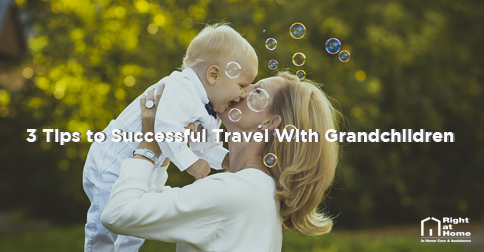 When I met my husband, Alex, he was a widower with five grown children. I had three children of my own. After 20 years of marriage, Alex and I joke that our nine grandchildren are God’s reward for not choking our kids.

We have had the joy of traveling extensively with our grandkids. One year, we took five of them to New York City. A few years later, we took seven kids, ranging in age from 8 to 17, to Montana for a week of hiking.

Here’s what we’ve learned about traveling successfully with grandkids:

How to Set Boundaries

My friend Julie has grown tired of her 13-year-old grandson picking on his younger brother, so this summer she invited them to come to their beach house on separate weeks. She told each boy that he could bring one friend. Last week, the 13-year-old grandson called and said he wanted to bring two friends. One was a boy and one was a girl. He also said he was planning on staying a few extra days during his brother’s week.

I said, “Yes. Just like that. You say, ‘No. That doesn’t work for us. You can come the last week of August, and you can bring one friend.’ Period.”

Spending time with grandkids isn’t just about making sure they have a good time. It’s an opportunity to teach them how to treat other people. If we act like a doormat, we teach them that it is OK to be rude and inconsiderate. If we stand firm and teach them to respect our boundaries, we can help them grow into responsible, thoughtful, caring adults. And that might end up being the greatest gift we will ever give to a child we love.

Elaine K. Sanchez is the author of the book, “Letters from Madelyn, Chronicles of a Caregiver.” She is also the co-founder of CaregiverHelp.com, an online caregiver support program, and she frequently delivers keynotes, workshops and trainings at healthcare and caregiving conferences across the country. You can contact her directly at elaine@eksanchez.com.