Women Inventors Who Changed Our Lives 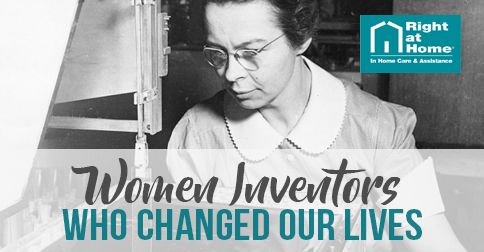 Do you know the following five ingenious women behind inventions and everyday products that deliver comfort, convenience and better health for us all?

Marion Donovan (1917-1999) was the true “mother of invention.” She created a waterproof diaper cover called the “Boater,” and then improved it by adding snap fasteners to enhance the product’s safety. The “Boater” was a huge success at Saks Fifth Avenue. But Donovan did not stop there. She took the “Boater” up a notch by designing the first fully disposable diaper in 1951. Although none of the manufacturers took interests in the new product, Victor Mills eventually drew inspiration from Donovan to create Pampers® a decade later.

Katharine Burr Blodgett (1898-1979) was the first woman to earn a Ph.D. in physics from Cambridge University and the first female hired by General Electric. Non-reflective glass is her most-celebrated invention, which is widely used in camera lenses, eyeglasses, windshields and computer screens today. During World War II, she invented the smoke screens that saved lives from toxic smoke.

Grace Murray Hopper (1906-1992), nicknamed “Amazing Grace,” was a pioneer in computer science. The U.S. Navy Rear Admiral dedicated her life to serving our country. She developed a compiler that eventually led to the creation of the popular programming language COBOL. Hopper also coined the term “computer bug” and popularized it. In her lifetime, Hopper was awarded honorary degrees from 30 universities.

Margaret Knight (1838-1914) created her first invention at the age of 12 while she was working in a textile mill. Her keen observation resulted in a device that automatically stops a machine if something gets caught in it. She received her first patent 21 years later for a machine that makes flat-bottomed paper bags, which did not come easy. When a male machinist attempted to steal her design, Knight took the case to court, and with substantial evidence, she eventually won it. She continued to acquire more than 20 patents and designed approximately 100 innovations throughout her lifetime. One of her obituaries described her as a “woman Edison.”

Stephanie Kwolek (1923-2014) invented Kevlar®, a heat-resistant material that is five times stronger than steel. The material is extensively used today in bulletproof vests, helmets, tires and suspension bridge cables. The lifelong research chemist at DuPont was nationally recognized in 1960. She obtained 17 U.S. patents during her career.

Are there other female inventors whom you admire?