The History of the U.S. Oktoberfest 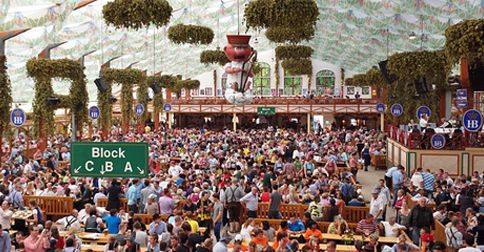 Eins, zwei, drei. One, two three. Americans across the country lift a hearty ale and down bratwurst and sauerbraten in support of the annual Oktoberfest, but just how did this German festival come about?

Let’s start with October 12, 1810, and the royals of the German state of Bavaria. On that date, Bavarian Crown Prince Ludwig married Princess Therese von Sachsen-Hildburghausen, and the couple determined to celebrate with an everyday gala for the masses. No modern-day wedding crashers invaded this public event—the people of Munich were all invited to the post-wedding revelry in the public fields outside Munich’s front gates. Named after the new princess, the party grounds were called Theresienwiese, which means “Therese’s meadow.” The locals eventually shortened the grounds’ name to Wies’n.

Plenty of festive foods and alcohol marked this colossal wedding reception, culminating in horse races before the royal family. A rousing hit with the Bavarian revelers, the event became an annual Oktoberfest tradition across Bavaria, spreading beyond Germany’s borders. Today, Oktoberfest is celebrated in Germany for 17 or 18 days from late September through the first Sunday of October. Country after country, drinking beer is the hallmark of Oktoberfest with millions of gallons consumed each year.

About a century after the original Bavarian fest, America started hosting its own Oktoberfest celebrations throughout September and October. A list of 2017 U.S. Oktoberfest events can help you choose your own destination for enjoying traditional brews, German food, live music and family-friendly entertainment from carnival games to pony rides (don’t forget those first Bavarian steeds). Note that beer is not the only drink on Oktoberfest menus. There’s often the non-alcoholic German beverages apfelsaftschorle (apple spritzer), kinderbowle (fruit punch) and schlammbowle (ice cream float).

Here are 10 of America’s most popular Oktoberfest cities:

For seniors to young ones of any nationality, Oktoberfest can be a time to gather and make memories with family and friends. And an excuse to wear lederhosen or a dirndl and snack on strudel. Eins, zwei, drei!

How do seniors you know like to celebrate Oktoberfest?