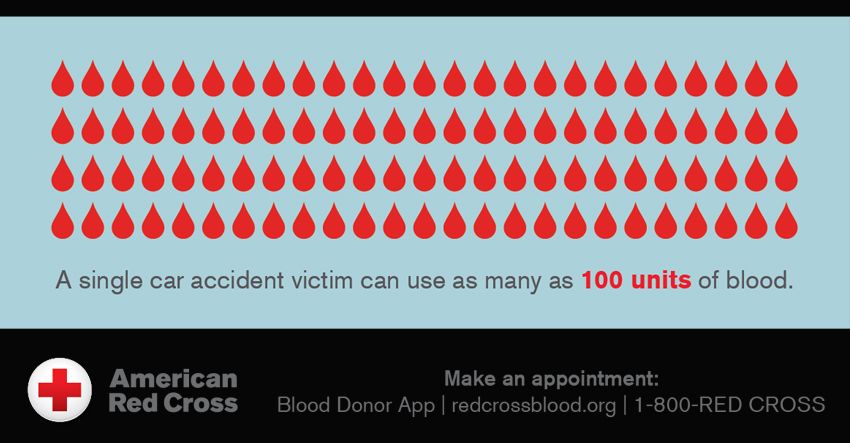 Since March is Red Cross Month, we spoke with Samantha Pollard, External Communications Manager for the American Red Cross, to learn more about various ways we can donate blood.

It’s more than just whole blood that is needed. As a donor, you are also able to give individual blood components, including platelets, used commonly for those undergoing chemotherapy for cancer treatment, and plasma, typically used to help heal burn victims. But blood only has a shelf life of 42 days, and platelets a mere five days, so a constant supply is needed for patients.

Who It Helps, Time It Takes and How Often It Can Be Donated

When people think of donating blood, they typically think about donating whole blood. But there are four different ways you can donate blood:

Whole Blood: This refers to a donation of red blood cells, platelets and plasma—the whole shebang! It’s a “regular” blood draw, which starts with your health history and a mini-physical to check your blood pressure, temperature and pulse. After you are approved for donation, the blood draw will begin: A technician will clean your arm with antiseptic and open a new, sterile, disposable needle to collect your blood. The entire process takes about one hour.

“Sometimes, just coming in for the free mini-physical alone is worth it,” says Pollard. “And the American Red Cross app can hold your medical records from prior tests, so there’s a way for you to share that information with your physician if you need to.”

Power Red: Also known as a “double red cell donation,” a “Power Red” donation means the giving of a concentrated dose of red blood cells—a machine separates your red blood cells from other blood components and returns your platelets and plasma to you. This process, which takes about an hour and a half, is a little longer than a whole blood donation. When you donate Power Red, you also have a longer wait time between donations—112 days compared to 56 for a whole blood donation.

Platelets: Platelets are tiny cells in your blood that help it to clot and stop your body from bleeding if you get cut. Chemotherapy can destroy platelets, so a platelet donation will most likely be used to help someone battling cancer. During a platelet donation, an apheresis machine collects your platelets (along with some plasma) and then returns your red blood cells and most of the plasma back to your body before completion. A platelet donation is the most time-consuming (it can take up to 2.5 hours), so it’s not uncommon to see many seniors making this type of donation.

"One of my favorite things about going to our donor centers is seeing our donors who have standing appointments every two weeks to donate platelets,” says Pollard. “And because the process is so long, many of them have become friends. In fact, a group of them now all plan to go out for breakfast after their donations."

Plasma : Plasma is used to treat patients in emergency situations, like burns and trauma. The American Red Cross specifically takes AB plasma from donors, which is only found in 4 percent of the population but can be given to all blood types. During a plasma-only donation, blood is drawn from one arm and is run through a centrifuge that separates out the plasma from the rest of your blood and then returns your red blood cells and platelets back to your body. A typical plasma donation takes about 75 minutes.

“Plasma is a rare donation, but very much needed,” Pollard says. “We encourage everyone to get tested to see if they’re a match for this type of donation!”

“The American Red Cross collects about 40 percent of the nation’s blood,” says Pollard. “But you can find other blood donation banks in your neighborhood or even organize an office blood drive—every bit counts and it could save someone’s life.”

The Red Cross estimates that 6.8 million people in the U.S. donate a combined 13.6 million whole blood and red blood cells each year. While that number may seem high, those donations only come from a mere 10 percent of eligible donors. Approximately 36,000 units of red blood cells, 7,000 units of platelets and 10,000 units of plasma are needed daily in the United States.

There are still a lot of myths out there about donating blood, however. For example, at one point it was thought that you could not donate if you had tattoos or diabetes, but that is no longer the case. If you have bloodborne diseases, such as HIV/AIDS or hepatitis, those are disqualifying for blood donation. Otherwise, anyone can donate—even those on various medications. The health questionnaire you fill out beforehand will ask about medications, and if any disqualify you, the technician will let you know prior to the blood draw.

“Many people think they need to know their blood type beforehand, but a lot of people learn their blood type upon donation,” Pollard says. “There is also no age limit for donating blood. Many of our best and most regular donors are over the age of 65!”