Published By Rabbi Shalom Plotkin and Elise Braverman-Plotkin on May 05, 2016

Holocaust education is a cause close to our hearts and caring for survivors sometimes requires special sensitivity to their experiences. Organizations such as the Blue Card Fund, The Jewish Federation of Cleveland, and various Jewish social service agencies can be valuable resources when it comes to providing appropriate senior care.

We are honored to have served, in a small way, six Holocaust Survivors in 2015. They were young teens during WWII and suffered unimaginable loss. These survivors built impressive legacies as immigrants to the United States and, like all seniors, we think they deserve to age with dignity.

This past week we partnered with the face-to-face Holocaust education program at Congregation Shaarey Tikvah in Beachwood to train members of our staff and community social workers.

Mr. Ellis Lewin: Giving Back and Building a Legacy 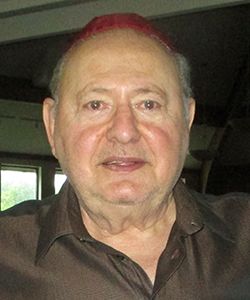 We met with a Holocaust survivor, Mr. Ellis Lewin and learned about his journey from Poland to America. Mr. Lewin asked us to share his story whenever possible.

Ellis was 12 years old in 1942. He should have been preparing for his bar mitzvah, but instead he and his family were torn from their home and forced into the Kraków, Poland ghetto. People were sick and starving in the ghetto, but it soon got worse.  His family was forced into a cattle car and shipped to the Auschwitz death camp.

Ellis remembers feeling a ray of hope when he saw the infamous sign above the Auschwitz gates that read "Arbeit Macht Frei," which translates to "work sets you free." He saw the smoke belching out of the chimneys and believed there were mills at the camp.  That hope quickly became horror. Ellis was separated from his mother and twin sister and he never saw them again.  They were gassed, cremated and sent up those chimneys. While Ellis survived the atrocities, it was not without tremendous struggle and suffering.

After three years, six slave labor camps, many beatings, and thousands of appeals/roll calls he was liberated by American troops whom he calls his ‘angels.’ One soldier gave him a piece of chocolate, which he devoured. Unfortunately, he'd become accustomed to meagre potato peelings and the chocolate was too rich for his system. It made him really sick.

After living in such unhealthy conditions for so long Ellis also contracted typhus. He spent six months in the hospital before moving to Cleveland. Eventually, he joined the military and became an American GI as a way of emulating his heroes. He served as a tank commander during the Korean War.

Ellis hoped to become a concert pianist like his father before him, however his ability to concentrate and play at that level of perfection was shattered by Nazi tortures. Instead, Ellis became a successful businessman. He and his wife are blessed with three grown children who have all become musicians. They are Ellis's legacy and his triumphant answer to the horror he survived as a very young man.

This brief story illustrates some of the special challenges in caring for our precious, remaining Holocaust Survivors. The daughter of a client called to say that her mother Mrs. M, had been taken to the local hospital with complications from pneumonia and Alzheimer's. Mrs. M is also a survivor. She was refusing medical treatment, wouldn’t listen to her daughter or cooperate with anyone trying to help her.


When I arrived at the hospital I found her treatment in disarray because she was scared of the IV and medications.  Mrs. M looked gaunt and haggard. She asked me if I had seen the Nazi doctor who was trying to perform experiments on her.  I went along with her hallucination and agreed that I saw the doctor, but knew him to be a good man. We prayed together.

Mrs. M eventually agreed to the IV, which was placed near the numbered tattoo she was assigned on her first day in Auschwitz more than 70 years ago.

I recently visited her again and she’s doing well.  Mrs. M is doing well at home and has even gained a few pounds.  She introduced me to her brother and sister-in-law, also Holocaust Survivors, as the "shtarker mensch" (good man) that saved her life.  I was touched.

Heartbreakingly, she also said it would have been better if she had died.  The struggle of Alzheimer’s combined with the horrors of her long-term memories are sometimes painful to witness, but caring for these vulnerable seniors is extremely important work. We are honored to play a small role in the life of Mrs. M.

For further reading we suggest the following resources:

Contact Us If you can’t find what you’re looking for or have a specific request, simply complete the form below. We’re always here to help.
4e2e5efb-85a8-4441-93d6-efbae3246c94 https://www.rightathome.net/cleveland LocalSite