For the last 2 ½ years we’ve had the pleasure of helping in Belva’s care. Prior to a stroke Belva had, she liked to do embroidery, go camping and grow many different kinds of flowers in her garden. She liked to can and preserve fruits and vegetables. She also liked to read and do crossword puzzles. Belva struggles with losing her independence and is now a total assist. She really enjoys it when family comes to visit. She loves to watch the hummingbirds fly in to drink from the feeder hanging by her patio door. 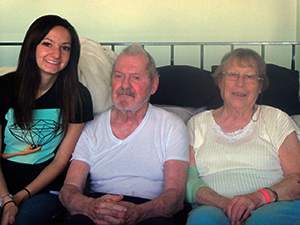 Larry and Lois have been clients with our office for one year and we’ve enjoyed the opportunity to help in their care. They have a dog named Toby.

Larry grew up in Ogden.  He served in the Air Force for 20 years before retiring. Then worked at McKay Dee for 20 years. He enjoys working on various things and working with his hands.  His favorite quote is “I am in the vertical above ground, not watching any grass seeds grow”. And his personal motto is to always stay busy.

Lois grew up on a farm in Idaho and moved to Ogden when she was 12 years old. She enjoys reading and likes to travel. She traveled a lot while Larry was serving in the Air Force. And she used to spend time as a door to door salesman.

Thank you Larry & Lois for allowing us the privilege of caring for you! 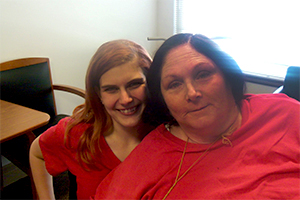 Holly has been a client with Right at Home for over 3 years. She enjoys reading, Sudoku puzzles, word searches, fill in the blank puzzles, poems and watching murder mysteries. She grew up in Washington Terrace and Brigham City. When she was a toddler, her dad nicknamed her “Little Fighter” after she had heart surgery because he was sure she could fight her way out of anything. And fight she has! Holly has had MS since she was in her 20’s. She was married to a “crazy man” for too many years but then met the love of her life and they were married for 4 years before he passed away.

She has siblings spread over the US. She has a sister in Denver and one in Layton and her brother lives in Austin. Holly has 5 children. She has 3 sons (one deceased) and 2 daughters. Her favorite quote is “I am here to testify that there are greater forces in the universe than us and when we connect with those forces miracles happen” - Aron Ralson Her life motto is...Difficulties in life are inevitable. Success is optional! She is pictured here with her caregiver, Mary Grigg. 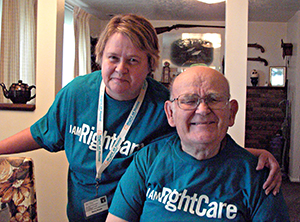 Brent has been a client with Right at Home for one year. He grew up on a farm in Taylor, Utah and goes back frequently for visits. Brent is full of personality and his caregivers look forward to going to his house to help him.

He collects guns and all kinds of antiques. He has cats, dogs, rabbits and horses. He worked for Weber County School District for 21 years managing people and working as a sanitation engineer. 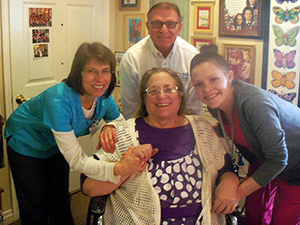 Linda has been a valued client of ours for the past three years. Linda grew up in Logan, Utah. She has traveled all over the world; including, Oman England, Mexico and Canada. She has also lived throughout the United States; including Arizona, Texas, New Mexico, California, Nevada, Idaho and Colorado.

She Loves art in all its forms and creativity. We even have one of her painting’s hanging in the lobby of our office. She loves to sew, read and enjoys writing. She collects dolls. She can even write your name in Arabic, if you ask her.

Linda loves children and one of her life’s mottos is to be kind, respect yourself and others. Love, for her, is always the answer. She loves having fun in life and has a fun sense of humor. In fact, when filling out a form and it asks for her “race”, she says “I’ve never ran one”! 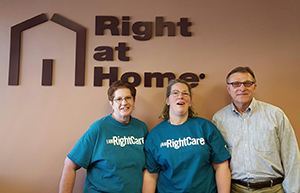 Jessica(middle) has been a client of ours for 4 years. Jessica grew up in San Diego, California and has lived in Utah for the last 16 years. She enjoys sewing and loves to make dog bandannas and Halloween costumes for her nieces. She loves music and recently got to see her favorite band, Air Supply, on her birthday. She even got to meet the band. She loves music and channeling her inner "hippie". She has a Golden Doodle named "Groovy". She even used to have a floppy eared bunny named " Hippie".

Her caregivers say she has the best sense of humor. They laugh together until they their sides hurt. In fact, Jessica's favorite quite is " it's all fun and games until someone get's hurt and then it's hilarious".

She ran track in 1994 Paralympics World Championship in Germany. She used to be a CNA and EMT. There were people who said that she couldn't do it and so she decided to prove them wrong! Jessica also has a BS in Criminal Justice.

Contact Us If you can’t find what you’re looking for or have a specific request, simply complete the form below. We’re always here to help.
aa7329dc-7047-4bee-8997-8f00d6de9bf4 https://www.rightathome.net/davis-weber-counties LocalSite