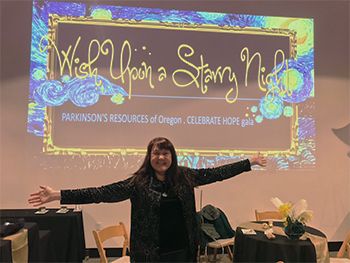 Parkinson’s Resources of Oregon (PRO) is a nationally recognized nonprofit with the singular focus of improving quality of life for Northwest residents living with Parkinson’s by bridging the gap between medical care and holistic wellness through balancing hope for the future with education and services for today.

In April, Ed and Carol ventured north to Portland to attend the PRO Wish Upon a Starry Night Gala. At this gala, there were many features to help raise awareness and funds for research into Parkinson’s Disease. They had a silent and a live auction, a dinner and many forms of entertainment.

This organization is one that is important to Right at Home and its owners and staff, as this disease is one we specialize in. Ed and Carol find ways to support this group frequently, especially since it has many local events in Eugene. Just last week, the two of them attended an ice cream social hosted by the PRO to kickoff the awareness for their Sole Support for Parkinson’s 2019 campaign which will culminate in their 15th annual walk for Parkinson’s fundraiser on September 22nd this year. The PRO will also be hosting another ice cream social on August 8th this year.