- Right at Home Glendale and Burbank - 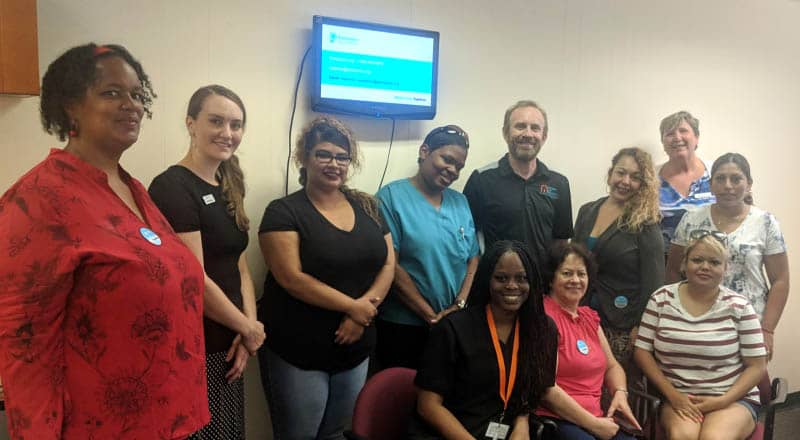 Right at Home was pleased to welcome Sarah Osborne and Bernie Detig from the Parkinson’s Foundation to our office to give a presentation to our care staff as well as promote two (2) exciting, upcoming events. This eagerly anticipated training was possible in part due to Right at Home’s relationship with the Parkinson’s Foundation as a national sponsor to their annual Moving Day fundraising events.

The first part of the training was conducted by Osborne, who works as the Community Program Manager for the Parkinson’s Foundation’s office in nearby Santa Clarita. She went over these fundamental questions regarding the disease:

Osborne highlighted that Parkinson’s Disease (PD) is a neurodegenerative, progressive disorder that affect predominately dopamine-producing neurons in a specific area of the brain called substantia nigra. Nearly one million Americans and 10 million people worldwide live with PD. In the U.S. alone, approximatey 60,0000 people are diagnosed the disease every year. Symptoms generally develop slowly over the years and progression varies per individual. Common symptoms include:

Parkinson’s usually affects people over 60, although in rare cases some people will develop PD before age 50. Mean are 1 ½ times more likely to have PD than women. While there is no cure for Parkinson’s Disease, it is possible to have a good to great quality of life with PD. Treatment for each person with Parkinson’s is based on his or her symptoms, and may include medication and, later, surgical therapy. Other treatments include lifestyle modifications, like getting more rest and exercise.

"Sarah gave an excellent presentation,” stated Right at Home Training & Events Coordinator Vanessa Linares, “These kind of trainings are invaluable to the growth and development of our staff."

Afterwards, Bernice Detig, who works as the Development Manger for the Parkinson’s Foundation Los Angeles and Ventura counties, talked about the upcoming Moving Day Los Angeles event on Saturday, November 16, 2019 at an exciting new location – Los Angeles State Historic Park in beautiful downtown Los Angeles. Right at Home in Los Angeles has had a presence every year for the event and is excited again to be part of the festivities. To learn more about the event and sign-up a team today, please visit www.movingdayla.org or email Bernice Detig at bdetig@parkinson.org to register. In addition, on October 19th from 9am-3pm, the Parkinson’s Foundation will be hosting a program for Spanish-speakers at the DoubleTree in Norwalk. For more information, call 1-800-473-4636 (option 3) or email helpline@parkinson.org.

Contact Us If you can’t find what you’re looking for or have a specific request, simply complete the form below. We’re always here to help.
a22d3ab4-a556-4316-ba63-c5176155950b https://www.rightathome.net/glendale LocalSite