Suk Ahn was born in South Korea and immigrated to America at the age of 2, where he spent most of his childhood in Glendale, California. He attended Biola University and studied Sociology. After leaving Biola University, he worked at Prudential Realty as a real estate agent in the San Gabriel Valley area. His success in the real estate market led to purchasing his first Subway franchise. Within the first 6 months, his franchise sales doubled and he acquired a second location that same year. After successfully owning and operating the business for 5 years, Mr. Ahn sold both Subway franchise locations and continued in the restaurant industry by purchasing a Japanese Quick Service Restaurant. He built his first location in 2011, second location in 2012, then acquired his third and fourth locations in 2013.

After being in the Franchise Quick Service Restaurant industry for over 10 years, he wanted to pursue a different direction with a meaningful career that had a purpose. One day while listening to talk radio during his daily commute, a home care advertisement commercial struck a chord in his heart. As he researched more into the industry, he realized that was exactly what he was searching for, a growing industry with the opportunity to serve and help seniors and their families. After speaking with a handful of home care companies, he made the call to Right at Home and was immediately drawn by their passion and commitment to their mission. As the conversations and learning process continued, he knew he had found the right industry with the right company. Mr. Ahn opened his Right at Home office in Hacienda Heights so he can proudly serve the neighborhood and surrounding communities where he calls home.

Sam Kim is a proud franchise owner of Right at Home, providing quality home care for families and their loved ones in Hacienda Heights, Whittier and surrounding areas. He finds it extremely rewarding to play an important role in improving the quality of life to those he serves.

Sam’s compassion to serve others began at an early age, where he was involved with various non-profit organizations and church groups to travel domestically and internationally to help individuals and families that were in need. After high school, Sam received a scholarship to play college basketball and graduated with a degree in Kinesiology. His pursuit of becoming a professional basketball player was cut short due to countless injuries. From his own personal experience dealing with injuries and the healthcare industry, he understands the value of rehabilitation and recovery, and how that can greatly impact an individual’s quality of life. With these experiences and knowledge, along with his passion for serving others, he decided to join the Right at Home family with his business partner, Suk Ahn, and opened their office in Hacienda Heights. 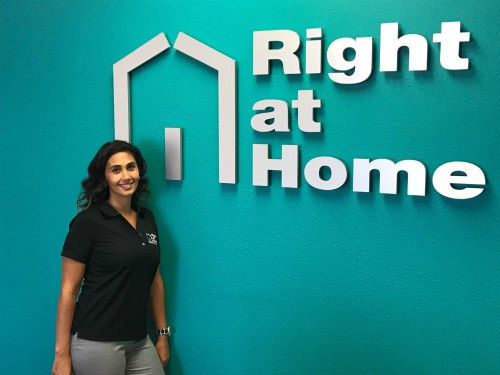 As the General Manager of Right at Home Hacienda Heights, Hanna Aboulwafa plays a vital role overseeing the day-to-day activities and business operations. She first joined Right at Home as a caregiver back in 2007, and her passion for home care continued to grow as she developed strong relationships with families and caregivers. Hanna loves interacting with seniors and listening to their stories, which helps her with customizing their care plans to improve their quality of life. Her goal is to provide a positive and friendly environment for our caregivers, our seniors and their families.

5 Tips for Healthy Weight Management in Wake of Pandemic

I used Right at Home for several months to assist with the care of my grandmother. The service providers that worked for us were very professional, knowledgeable and easy to work with. The administrative staff is very proactive and were readily available to the point that if the provider was going to be late, the administrative staff came out and sat with my grandmother until the provide arrived. This service is excellent if you need good reliable and dependable care for a loved one.

Contact Us If you can’t find what you’re looking for or have a specific request, simply complete the form below. We’re always here to help.
873bf8e8-6a13-41db-906c-d1fb2c6ac749 https://www.rightathome.net/hacienda-heights LocalSite