Whitney Krupala’s main goal in life has always been to help others. Her experience as a nurse allowed her to do just that; it also sparked her interest in the health care business.  Now, she will be dedicating her time and talents to Right at Home. Growing up in Bowie, TX, Whitney was able to establish a strong bond with her great-grandparents and grandparents, who instilled upon her the desire to pursue in-home care as a career. 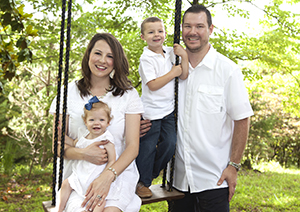 Whitney went on to obtain her Bachelor’s of Science in Nursing from Texas Tech University Health Sciences Center. Wanting to further her education, Whitney graduated from University of Texas at Tyler with a Master’s of Science in Nursing and a Master’s of Business Administration. As Whitney gained more and more experience within her field, she was able to explore many diverse avenues in the nursing industry.

After primarily working in the surgical intensive care unit for a few years, Whitney relocated to Mansfield, Texas as a school nurse, a position she excelled in for seven years. Though she appreciated her job, Whitney felt as if something was missing and knew that she wanted to explore career options in health care business and administration.

When discussing potential ventures with her father, who had been a business owner since she was a child, and her grandparents, who were always some of her greatest encouragers, Whitney reached the conclusion that in-home care would be the ideal business venture for her to become a part of.

Taking a leap of faith, Whitney reached out to Right at Home after seeing an ad in Southwest Airlines magazine that she saw end route to visit her grandparents. Learning about the brand’s mission and available territory, Whitney knew she had found the franchise she had been searching for.

Whitney and her husband, Cody, live in Midlothian, Texas with their son Heston and their daughter Emerson.  Cody and Whitney have a passion for serving Midlothian and surrounding communities and are active in their church.  Whitney is also a member of the Waxahachie Junior Service League.

Contact Us If you can’t find what you’re looking for or have a specific request, simply complete the form below. We’re always here to help.
eace453a-e62e-4b51-a70b-b31c0bb211d3 https://www.rightathome.net/midlothian LocalSite