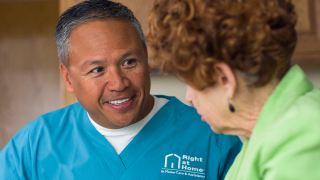 Myrtle Beach | About Us
|Back to About Us| 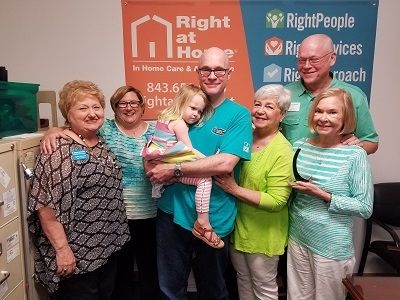 After Full Military and Teaching Careers, Elderly Friends Inspired Them.

Bre and Harry Willoughby were professionals with long careers when they were both touched by concerns of seniors who needed care.

Bre was motivated to get into home care because of her relationship with an elderly couple who were members of her church. They both were diagnosed with cancer. "I acted as their caregiver for over a year. Whatever was needed to keep them independent and at home, I did. These friends really showed us there was a real need for in home care in our area." Bre was an elementary school teacher for 30 years before owning a Right at Home office.

Harry was motivated to get into home care by a relative who told him, “you should get into a business involving seniors because you know how old folks have always liked you!” “You have empathy for seniors” would have been a nicer way of saying it. Having taken training to be a group moderator, Harry regularly attends a local Alzheimer’s Support Group. Having a mother with Alzheimer’s disease and a late father who had vascular dementia, he has a keen awareness of problems families face dealing with dementias. Harry is an Army veteran (Infantry Officer) and a 30 year hotelier in a previous life.


Lunch and Learns Keep the Team in Touch with Myrtle Beach

Since Harry and Bre Willoughby opened this office of Right at Home, they have hosted several “lunch & learn” meetings at various hospitals, hospices, church groups, and other groups looking for information about what home care is and how it can work for them. They have been heavily involved with several Alzheimer’s Association activities to include the Alzheimer’s Ball, Alzheimer’s golf tournament, and Alzheimer’s Memory Walk events.

Bre & Harry’s son, Wyatt, joined them in the business in 2010. Wyatt brings a background in accounting, law, and computer programming to the office. In addition to handling all types of duties for the agency, he works on streamlining and automating office procedures to increase the efficiency of operations.

Carol is a shining example of the dedication our professional caregivers have for their clients and the person-centered care provided by our team. In December she appeared on television to discuss techniques for helping seniors beat the 'Holiday Blues.'

Our Myrtle Beach team was recognized for exemplary customer service, and won the Right at Home 2017 Client Satisfaction award for the Southeast Region. Out of over 350 independently owned and operated Right at Home caregiver agencies nationwide, only five receive this honor each year.