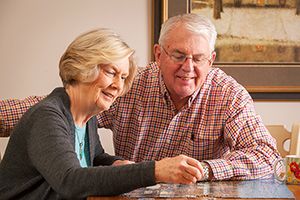 First of all, to describe a weighted blanket and it purpose. This blanket has compartments in it where nontoxic poly pellets are sewn into these pockets to make the blanket heavier. The poly pellets are sewn uniformly so that the weight is distributed evenly. This even distribution of weight exerts pressure all over the body when the blanket is used. This blanket is based on Deep Pressure Touch Stimulation which activates and stimulates the deep pressure touch receptors in a person’s body.

When the body is stimulated this way, serotonin is released. This gives the person stimulated a feeling of being grounded, calm and secure. In some ways, it feels like a warm hug from a caring person. So, sleeping with a weighted blanket will calm people, ease their minds and cause them to fall asleep faster.

A weighted blanket can help not only an Alzheimer’s patient fall asleep easier, but also dementia and Parkinson’s disease patients as well. The reasons are given below.

Other uses for a weighted blanket

The weighted blanket can additionally be used while a person is awake. If the person is feeling anxious or stressed, it can be draped across the legs or shoulders to reduce both stress and nervousness. Also, the blanket has an extra bonus in that it is warm. When people get older, they are affected by the cold to a greater degree so this helps keep them warmer.

The weight of the blanket needed depends upon the size and preference of the person using it. The typical weight for an adult weighted blanket is about 15 to 30 pounds. In addition, when there is a medical condition involved, talking over the idea of acquiring a weighted blanket with a doctor for that person with the medical condition is advisable. Also, if the person has a respiratory problem or circulatory problem, this kind of blanket shouldn’t be used. The added weight would put pressure on the lungs and restrict blood flow.

Another use for the weighted blanket is for people who have depression, aggression, OCD, PTSD and bi-polar disorder. These disorders are linked to low serotonin levels and serotonin when released in the body gives a sense of comfort and feeling of well-being. The weight of the blanket helps give relief to the bad symptoms of these disorders by its stimulation of serotonin release.

A weighted blanket is useful for a number of different kinds of people as well as for senior citizens who have no underlying medical condition, but have trouble sleeping. It helps people sleep, feel safe, warm and secure.

Contact Us If you can’t find what you’re looking for or have a specific request, simply complete the form below. We’re always here to help.
b83b8a24-9ae1-46e8-bfb4-b7ef48747c0e https://www.rightathome.net/nassau-suffolk LocalSite