That is how April Wintermoyer learned how to write in first grade when her grandma was her teacher. That was Grandma’s name.

“That has been burned into my mind ever since, and I think that’s because of the repetition but also because it was Grandma. And let’s be honest; these days it makes Wintermoyer look easy,” she said with a laugh. “It was a little challenging for me back then. Needless to say, that was a whole sheet of that double-lined paper that we used back then.

“She was our savior when we moved back to Morgantown from my mother’s abusive relationship 150 miles away,” she continued. “Grandma also taught me how to tie my shoes, and she clothed, provided for, cooked, and housed my mother and her three children. She drove me to school every day, and, yes, that’s where she taught me to write.”

Luzadder passed away after a nine-year battle with Alzheimer’s Disease.

But Grandma’s mind dulled soon after Wintermoyer moved forward in elementary school, and this granddaughter still recalls the differences.

“I was about 7-years-old when the symptoms started,” Wintermoyer explained. “It started with forgetfulness, confusion, and memory loss. She was then diagnosed with a possible brain tumor, and surgery was even scheduled. That surgery, though, was canceled because there was no evidence of a tumor. There were only symptoms.

“After about four years of this, Grandma had a fall which resulted in a blow to the head. Her symptoms progressed rapidly after that,” she said. “Grandma then had trouble with everyday tasks, and within the next four years she was no longer able to drive. It was just too much confusion for her, but she convinced all of us that she was well enough to work as an aide at the school where she used to teach. The only possible diagnosis at that time was Parkinson’s Disease, but that didn’t mean she couldn’t work.”

However, Wintermoyer remembers one day when she had to help save her.

“One day she got stuck in a bathroom stall at the school. She went in, closed and locked the door, and then she could not get out. She was frantic,” this granddaughter said. “We had to go to the school to rescue her.

“I can remember crawling under the stall door to calm her down and help get her out,” Wintermoyer said. “Very soon after that Grandma was no longer safe to live on her own.”

This was in the late 1960s, and little was known about a disease initially discovered by German psychiatrist Dr. Alois Alzheimer in the early 1900s. Alzheimer encountered a 51-year-old female named Auguste Deter in the Frankfurt Asylum and following her death in 1906, he examined her brain and found the anomalies that later would become the identifiers for Alzheimer’s Disease.

His work, however, was challenged on several occasions for nearly a century, and that is why Genevieve Adeline Margaret Sampson Luzadder remained lost in her own world.

Wintermoyer, the owner of Right At Home in Wheeling and Morgantown, discusses dementia-related diseases on the Watchdog Network, AM 1600 WKKX and AM 1370 WVLY. (Photo by Steve Novotney)

“There still was no real diagnosis for Grandma, and only Parkinson’s was again considered and that eventually became to the culprit diagnosis,” Wintermoyer explained. “But her issues were not movement-related, and knowing what we know now, it doesn’t make any sense.

“But Grandma had to move in with us at that point,” she continued. “There was no help available. Not like there is today. Caring for her was all on us, her family. At that time people with those issues had to rely on sons and daughters, friends, the community, and even church members to help. At that point, my grandmother was an adult child.” 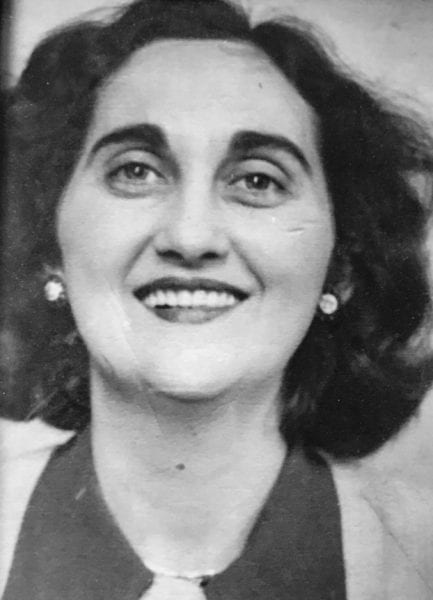 It is now known that Alzheimer’s Disease, the leading diagnosis concerning dementia-related conditions, begins slowly and worsens over time. As the disease advances, language becomes more difficult, mood swings are prevalent, and self-care declines. The pace of progression varies from case to case, but those suffering with Alzheimer’s Disease often withdraw from family and most others, too.

“And she was such a vibrant, intelligent woman whom I loved and adored how she walked around the yard picking up sticks. She was confused and she was dull,” Wintermoyer remembered. “Once she slipped out of sight, traversed a cliff, and wandered in traffic in the blink of eye. She even flushed her dentures down the toilet. At least that’s what we think she did.

“She also caused a house fire, and once she wandered out of the house and through the yard completely naked,” she said. “We didn’t know the woman anymore, and eventually we had no choice but to put her into a home. I spent many childhood hours sitting at the bedside listening to her cry and moan, and all I kept thinking is that I wanted to be somewhere else. Anywhere else. And that beautiful woman died in a nursing home.”

Today the cause of Alzheimer’s Disease is, for the most part, unknown. Researchers have found links to heredity, and it is believed that a history of head injuries and depression could be factors, as well. In the end, however, an examination of the brain following death is necessary for a definite diagnosis.

What is known for sure, though, is that Alzheimer’s Disease is the sixth leading cause of death in the U.S. and the only disease in the top 10 causes of death in the U.S. without a way to prevent, cure, or even slow its progression. An estimated 5.5 million Americans have Alzheimer’s dementia this year, including 37,000 in West Virginia. Overall, one in five citizens of the United States will be diagnosed with Alzheimer’s, and in the state of West Virginia it is one-in-four, according to the Alzheimer’s Association.

“It started when I was 7 years old and she passed away when I was 16, but when Grandma was sick, we didn’t know what Alzheimer’s was. We know so much more now,” Wintermoyer said. “We still can’t fix it, but we are searching for a cure.”

Grandma is the primary reason for Wintermoyer’s career as the owner of Right At Home with in-home care services offered in Wheeling and Morgantown. The company offers caregiving to those suffering from dementia-related diseases like Alzheimer’s, and also for those who have been diagnosed with Parkinson’s Disease. The care options include companion care and light housekeeping to assist with daily living, and caregivers are open to flexible scheduling. More information can be found at the Right At Home website.

“I know I can’t fix it, but I now know that I can make more of a real and positive difference today than I could for my grandmother,” Wintermoyer said. “Now we can help families keep their loved ones at home where they are safe, comfortable, clean, and fed.

“That is why I do what I do, and I have done a lot of different things. I’ve been in food service, I was a youth leader and Sunday school teacher. I worked as a medical assistant, and I have worked with those with special needs, but not one of those jobs was as satisfying to me as this is,” she explained. “I have to say this is the most fulfilling thing I have ever done in my life.”

The conversation about getting into her current profession began in 2007, and a year later Wintermoyer opened the Morgantown office. Today, she employees more than 60 in the two cities.

“It is true that my grandmother has always stuck with me, and that experience has led me to where I am today,” said Wintermoyer, who now splits life between Wheeling and Morgantown. “When we moved home she was my knight in shining armor, and it upsets me to this day that there weren’t the right kind of services for her back then. When I stated talking to people about it, no one knew of any company that could be found to help.

“But then I found Right At Home in a magazine, and I fell in love with the idea. I love the mission statement, the values, and then I found out that the founder is a West Virginia native who is from Huntington and graduated from Marshall University,” she added. “This is very important to me. I want to make a difference, and this is my chance to make that difference.”

5 Tips for Healthy Weight Management in Wake of Pandemic

I am very thankful for the services that Right at Home provides for me and my family. As a medically disabled Veteran, the monitoring by the VA and the assistance from the staff at Right at Home enables me to live at HOME. Thank God for your office staff and Home Health staff. They go above and beyond helping me to remain Home. I can't say enough good things about them. Leann is the greatest aide.

Contact Us If you can’t find what you’re looking for or have a specific request, simply complete the form below. We’re always here to help.
5fdb900f-f84a-4664-86e2-8eb25e14362c https://www.rightathome.net/north-central-west-virginia LocalSite