Meet the Owners of Right at Home North New Jersey 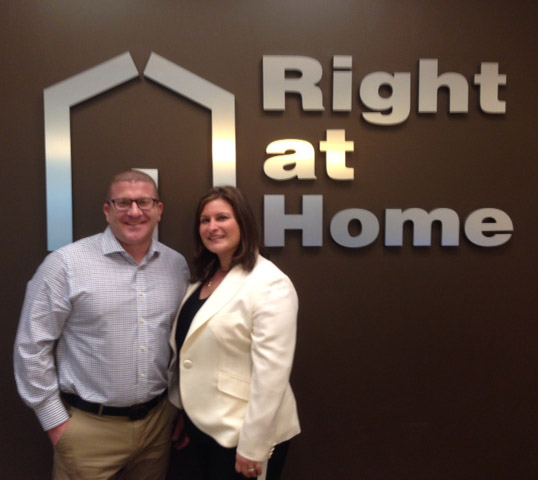 After growing up in Pompton Plains, N.J., Ray Giordano obtained a bachelor’s degree in economics from Wesleyan University. Ray then began a 20-year career on Wall Street and climbed the ladder of success with well-known companies such as Lehman Brothers, First New York Securities and Quad Capital.

Robyn Giordano earned a bachelor’s degree in psychology from La Salle University and a master’s degree in social work from New York University before beginning her career as a discharge planner for Saint Clare’s Hospital, where she learned about different aspects of the health industry. Robyn later decided to transition into her true passion – social work – and worked in the industry for the next seven years.

As the Giordano family grew, Robyn decided to become a stay-at-home mother as Ray continued his work on Wall Street. The tables turned seven years later, though. Robyn began exploring her re-entry into the workforce as Ray sought to settle down at home and spend more time with their family.

Personal experience in caring for a senior

Robyn: My mother had cancer and broke her foot; she was weak and needed extra assistance on a regular basis. My family helped a lot, but Ray and I both realized how much a caregiver would have benefited everyone when we were introduced to home care services that can help alleviate some of the stress on the family.

Ray: My grandmother lived to be 100 years old and was healthy; but with age, her body began to wear out and it was difficult for her to get around. My mother served as her main caregiver and over time it began to take a toll on my mother. She was scheduling appointments and ensuring she had someone at home for my grandmother at all times – it became emotionally, mentally and physically demanding. People want to stay in the comfort of their homes, and if we would have known home care services were available, it would have been easier for everyone. Our personal experiences opened our eyes to the home care industry and the help that can be provided to families in the area.

The couple eventually decided to introduce Right at Home to the North Jersey area and dedicate themselves to caring for seniors in the community.

Andrea Spinelli-Haag, BS, RN, graduated from Montclair State University with a Bachelor of Science. She worked as an emergency room nurse for 16 years before joining Right at Home in 2016 as the Director of Nursing. Although her specialty is in emergency medicine, Andrea also has experience working in home health care as a visiting nurse.

With an extensive experience in areas of emergency / trauma nursing, gastrointestinal (GI) nursing, ambulatory care nursing, and home health care; Andrea decided to make a transition from the acute care environment to pursue a career in the home care industry as she wanted to contribute back to the community—Morristownship, New Jersey—where she resides in. Her goal is to make it possible for people to live independently at their own homes for as long as possible.

Andrea is a Certified Family Nurse Practitioner and has obtained her Master’s Degree in Nursing. Andrea is passionate about health promotion and empowerment of her patients.

The Health Benefits of a Positive Attitude

Another Important Vaccine: The Shingles Shot

Encouraging Older Men to Take Care of Their Health

Contact Us If you can’t find what you’re looking for or have a specific request, simply complete the form below. We’re always here to help.
eee0f3b6-de78-4dfd-a8ea-71bdd782d82d https://www.rightathome.net/north-jersey LocalSite