April marks World Parkinson's Month where we celebrate those battling Parkinson’s disease and raise awareness about the condition. Around the world, there are people and organizations all fighting to provide a cure and treatment to those affected. 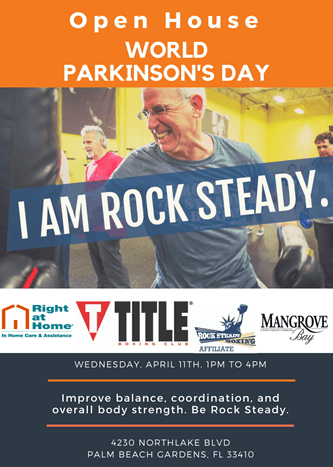 Locally, we are raising awareness through our Rock Steady Boxing class with TITLE Boxing Club of Palm Beach Gardens and Jupiter. Through this class, we provide Parkinson’s disease patients with the ability to increase their agility, strength, and coordination, as well as increase their social interaction through group exercises.

In honor of World Parkinson's Month, we are hosting an open house at TITLE Boxing Club in Palm Beach Gardens. Our amazing trainers and staff members will be presenting information on how boxing can improve and reduce the symptoms of Parkinson's disease. Classes are open to everyone, not just those who have been diagnosed with Parkinson’s. In addition, we host a Rock Steady Boxing class every Thursday at Mangrove Bay Assisted Living at 3:30 PM.

Parkinson's disease (PD) is a neurodegenerative disorder that affects both memory and movement. Over time, the disease progressively affects the structure of neurons, and eventually kills it. According to Cleveland Medical Clinic, Parkinson’s disease affecting approximately 1.5% to 2.0% of people aged 60 years and older. Parkinson's disease is named after the late Dr. James Parkinson. In his paper, "Essay on the Shaking Palsy", Parkinson describes six people he observed with signs of what would later be called Parkinson's Disease.

PD progresses in the later stages of life, typically around the 60s and 70s. Symptoms develop gradually and worsen over time. The symptoms of PD are split between movement (motor) and non-movement (non-motor) symptoms.

The more known motor symptoms include the trembling of hands, arms, and legs, slowness of movement, posture instability, and freezing, which is an involuntary inability to move. Since Parkinson's disease is progressive, some patients may experience symptoms differently than others, and at later or earlier stages of the disease. In some cases, some patients only feel symptoms on one side of their body, while others may feel it on both sides.

Parkinson's disease is broken up into five stages based on the Hoehn-Yahr rating scale. Many doctors use this rating to determine how far the disease has progressed in patients.

Stage 1 is generally the mildest of the disease. Some patients may experience some of the symptoms, but they are not as severe and typically on one side of the body. In most cases, these symptoms do not affect your daily activities but can become an inconvenience at times. Symptoms may include tremors, rigidity, changes in facial expressions, and feelings of clumsiness on side of the body.

As the disease progresses into Stage 2, symptoms of the disease may begin to worsen and become more noticeable. Symptoms of stage two may also begin to affect both parts of the body. These symptoms may include stiffness of the muscles, speech abnormalities, soft and monotone voice, slowness of daily activities, and poor posture.

Stage 3 is the turning point in the disease where balance issues become a problem. At this point, Parkinson's patients may begin to experience an increase in falls and decreased reflexes. In addition, all other symptoms of PD become more apparent such as slowness of movement. Although the patient can still maintain their independence, the symptoms may impair their abilities to perform certain tasks such as dressing and eating.

In stage 4, the disease has become severely disabling. In some cases, require an assistive device such as a wheelchair or walker. Patients at this stage can perform certain tasks but are critically limited. In addition, patients are unable to live independently and may require further assistance.

In the last stages of Parkinson's disease, patients are unable to get out of bed without any help. Tendencies to fall also become a hazard when standing or walking with or without an assistive device. In addition, they may experience freezing; a temporary, involuntary ability to move. At this stage, full assistance is required to maintain daily activities and prevent falls. Moreover, at this stage, non-motor symptoms such as depression and hallucinations frequently occur.

Contact Us If you can’t find what you’re looking for or have a specific request, simply complete the form below. We’re always here to help.
e9df02aa-0a79-421f-9190-905b907be045 https://www.rightathome.net/palm-beach LocalSite