'Go For Broke' Movie and Origin of the 100th Battalion 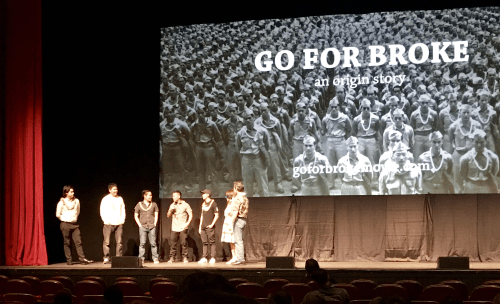 On Thursday, September 27, 2018, Stacey Hayashi invited Rick to see 'Go For Broke', her movie about the origin of the 100th Battalion, 442nd, MIS (Military Intelligence Service). The movie starts innocently on December 05, 1941 and leads us up to the US government seeing the Japanese American's loyalty and value. This resulted in the Japanese being asked them to fight for America and their Japanese American equality, freedom and dignity. It was a costly battle. However, that story is reserved for another movie.

'Go For Broke' takes us through their heroic struggle to be recognized as American citizens, instead of enemies of America. 'Who you going to shoot, them or us?' Was one the memorable lines. Note; the movie; 'Go For Broke' will play at the Dole Cannery Regal Theaters in Honolulu from October 15 through October 21, 2018. If you're on Oahu, we highly recommend seeing it. It's a completely local production and seventeen years into the making.

Stacey enlisted help from the entire state of Hawaii. The actors are from Manoa University of Hawaii's Drama Program. 10th Veteran, Goro Sumida & 442nd's Eddie Yamasaki were the two Nisei (2nd generation Japanese American's, First of their families born in the USA) who inspired Stacey's screenplay. Stacey made a powerful comic book, 'Journey's of Hero's' that she used to promote and raise funds for the movie costs. She autographed Rick's book while she passionately told him about her movie. Local film crews donated the use of their equipment and many notable Islanders donated time money, acted and produced the music score for 'Go For Broke'. Jake Shimabukuro's musical score is beautifully composed. Rick has now added the music to his music collection. Jake plays a head instructor who is a key person in the true history of the origin of 'Go For Broke'. As Rick was sitting down with his wife & cousins, one of his cousin's pointed at the screen & said, "Hey there's my uncle."  Right in the front by the .com. Wow! Rick's father-in-law served in the 100th Battalion. for more information please refer to www.100thbattalion.org.