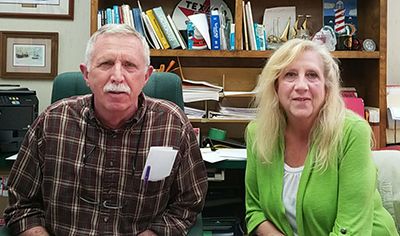 Marvin Bush and Rachel Bush-Howell’s family have lived in the Laurel area for more than four generations and have been an integral part of the community that began with Bush Dairy in the 1880s.

The brother and sister decided to begin their own business venture in hopes of making a difference in the community. They have found it very difficult to find good reliable healthcare for their aging parents. After a long 2 year search they found the solution with Right at Home. It’s a nationwide company with nearly 400 locations in 44 states and 8 countries. If you take that and wrap it up, it means we are helping a lot of people.

Around 14 % of people in Jones County are older than 65, according to the state Department of Health. It will increase drastically over the next many years because of the aging baby boomer generation. Baby boomers are people born between 1946 and 1964. They had significantly fewer children than their parents, meaning they have fewer people to take care of them.

The duo are excited to start Right at Home in the Pine Belt area. Since they are nationwide they know what is needed and what is not. Our services are not only for seniors but for anyone 18 years or older that have a need. We’ll do anything it takes to keep them independent. We’re commented to this because just about everyone is a parent or a grandparent, and we want to ensure to their children living out of town that they will be taken care off.

Adapting the Home When a Loved One Has Alzheimer’s Disease

Right at Home staff are often the only people with whom we may come in contact with for extended period of time. Often our health keeps us isolated from friends and family we might otherwise see more often. And so in a way, it magnifies the effect these people and agencies they represent; have upon our thoughts; the very way we feel while they are here to assist us. Right at home workers are both highly thoughtful and caring. I feel lucky to have them as part of my team.

Contact Us If you can’t find what you’re looking for or have a specific request, simply complete the form below. We’re always here to help.
91cbdbc4-ea84-43d8-aab4-be3fcd889ad8 https://www.rightathome.net/pinebelt LocalSite