It was a cold but clear night in December of 2003. I had just returned to my apartment at about 12:30AM after a grueling day at work. I had come here to Missouri State University to pursue my graduate education and was determined to try and pay my own way through college as much as possible. I was open to doing anything and soon found myself washing dishes for the cafeteria and even scrubbing and mopping floors in McDonald’s arena during their intercollegiate basketball season. It was after one such punishing night, that I saw my answering machine’s blinking red light beckoning me to pick up. Exhausted, I hesitantly picked up half expecting a telemarketing message of some sort. Instead, I heard my mum’s voice pleading me to return home as soon as possible.

My heart sank. I knew my dad had cancer. It seemed like everyone I knew did; and at the time I felt that cancer was something you simply dealt with for years on end. At least, that was my underlying assumption when I chose to come to America to pursue my master’s degree. I thought I would have enough time to finish my studies before I returned home to be with dad. I was so wrong.

I returned home to find my dad in a physical state that I’d never imagined. The cancer coupled with the chemotherapy had exacted a massive toll. He had lost all his hair, was gaunt, emaciated and mostly confined to his bed. He was quickly losing his ability to speak, his movements were hardly coordinated, and he needed assistance with all his most basic needs.

My immediate desire was to try and return him to a quality of life he had known before the cancer began its horrific and inexorable degeneration of his person. One of the first things I did was to build a ramp and procure a wheelchair so that I could get him off of his bed and out into the open air once again. He used to love his morning walks with his beloved dog (Julius), so I tried hard to replicate that experience for him by taking him along his favorite trails on the wheelchair. I’d bathe him; I’d shave him and I’d feed him. But the reality was that I was simply in denial; I secretly hoped that all of this effort would help revive him, heal him and bring him back to us – because we missed him. But sadly, that never happened. There were moments when things looked like they were going to get better. There’d be mornings when he’d wake up looking a little like his old self, and sometimes, he’d even have the appetite for toast, bacon and eggs! But I soon learned that these were simply imaginary windows of hope that were usually short-lived as his energy would quickly ebb and dissipate in a couple of hours. 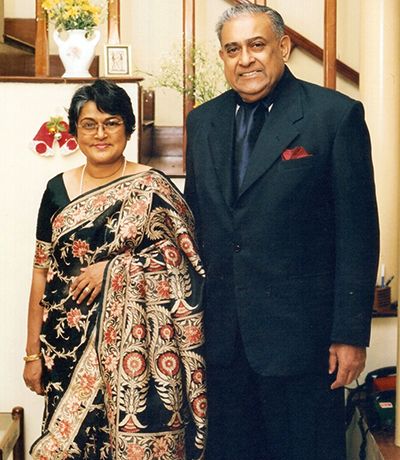 It was about this stage in his disease progression when he called me to his bed side one evening and made me promise him two things: “Ashwin” he said, 1. Go back to America and finish your studies” and 2. No matter what, keep me at home.

You see, my father was both a gifted and renowned orthopedic surgeon who had spent most of his life in a hospital setting. Growing up, I remember that if I really ever needed to talk to my dad I’d always have to call the hospital and be routed either to his consulting room or to the operating theater! He’d frequently leave home in the wee hours of the morning for emergency surgery or be back really late in the night after exhausting day of scheduled surgery. He really loved his work because he really loved caring for his patients – many of whom came to him because HE was their last glimmer of hope - in their hopes of being able to walk again or ride a bike again or even simply be pain free again.

So though I was intrigued about why he insisted on remaining at home, I promised myself that I would do anything and everything I could to help him remain in the comfort of his own home, his own room and his own bed.

Unfortunately, I knew little about the rapid progression of end stage cancer and of the excruciating pain and suffering it could pronounce on its victim. Seeing him in such utter agony, I knew that we had to do something to bring him at least a little relief. It was at this point that we began to seriously consider palliative care and chose to move him into such a setting thinking that it would only be temporary. My naivety also led me to believe that this would only be a transitionary move till we had the pain under control after which we could bring him back home. Once again, I was wrong. We lost him there.

After spending the better half of 2004 at home, I realized that the time had eventually come for me to return to America in order to at least try and uphold my second promise – to finish my education. Thankfully, that I did. I went on to complete my Masters degrees in Health Administration as well as in Public Health and was blessed to be offered a job with the Taney County Health Department in Branson where I worked in Public Health for 10 years. However, after 10 years, I began to wonder what the next challenge and the chapter of my life would look like.

Pondering this is when I came across this opportunity with Right at Home. I couldn’t believe it. It was a perfect fit – it meshed perfectly with my familial background in health care; my academic training in business and healthcare and my work experience in public health. But more importantly, it was the perfect platform for me to try to make amends on that first unfulfilled promise – to keep my dad at home.

What does Right at Home do?

Right at Home’s mission is simple but very clear: It is simply “To improve the quality of lives for those we serve” in communities that we love. We do this by providing compassionate companionship services, home making services and non-medical personal care primarily to our seniors and disabled adults who desire to stay independent and in their own homes for as long as possible. In other words, to me, its like me going home to be with my dad, to do all the things we were capable of, to keep him comfortable, well and right at home for as long as we possibly could.

Personal health caregivers are often the only people with whom we may come in contact with extended period of time. Often our ailment or afflictions keep us isolated from friends and family we might otherwise see more often. And so in a way, it magnifies the effect these people and agencies they represent; have upon our well being; the very way we feel while they are here to assis us. Right at home workers are both highly professional and caring. I feel lucky to have them as part of my personal care team.

Contact Us If you can’t find what you’re looking for or have a specific request, simply complete the form below. We’re always here to help.
7717884b-4de8-4a22-b5c1-b0639ceb4f2d https://www.rightathome.net/springfield LocalSite