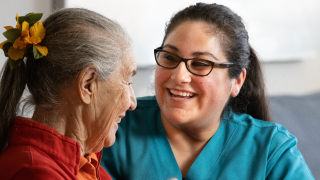 People often take for granted the things they do every day, like climbing stairs, taking care of personal hygiene and even just getting out of bed in the morning. But these things can become major challenges as you age. In many cases, loved ones think the only solution is to put their older family members into nursing homes. Right at Home’s caregivers can provide personal care with dignity and respect, so the home can be a place of comfort, not frustration. Contact us today at (314) 567-5545 to get more information on how we can help you.

Mobility isn’t just a matter of safety—it’s a matter of freedom. Right at Home’s caregivers have been trusted to help preserve that freedom for seniors and adults with disabilities across the country. We can help you with: 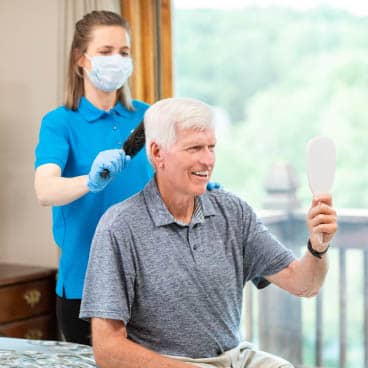 Personal hygiene is an important part of feeling well. But we know that as one ages, basic hygiene can become a challenge. Our caregivers can discreetly help with: 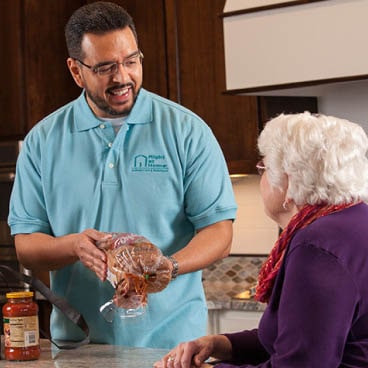 Not only can our trained caregivers help with planning and preparing meals that fit special dietary needs, they can also help seniors who experience problems feeding themselves. No matter the situation, we’ve got you covered.

After retiring from the U.S. Army in 1979, Bob started a small handyman business to stay busy and help out the people in his neighborhood. Before long, however, he began working on larger and larger projects – full decks, complete kitchen remodels, garage additions. Within ten years, he was a full-scale residential builder with his oldest son as a partner in his company.

His son became concerned about Bob’s well-being. It seemed to him that the years his father spent as a soldier and active construction worker were beginning to take a physical toll. At first, Bob simply had trouble standing up from his chair without a helping hand. He soon needed more help. His son, who had a family of his own, soon realized he couldn’t provide all of the care Bob needed.

Bob's family enlisted the help of Phyllis, a Right at Home caregiver. Phyllis arrives early several mornings a week. She waits outside of the bathroom as Bob bathes, just in case. Then she helps him get dressed by buttoning his shirt and tying his shoes. Bob loves it when she combs his hair and shaves his stubble with his electric razor. He says it reminds him of going to the barber on the Army base. Before she leaves for the day, Phyllis always gets Bob's mail and reads him the front page of the paper.

Explore Our Other Services